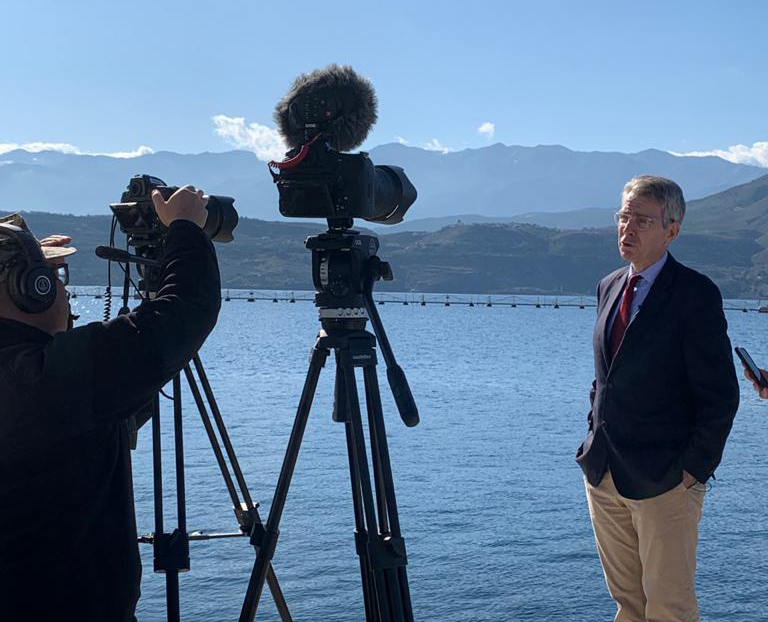 AFN: How you would describe the current Greek-American military relations in 2019 and how does NSA Souda Bay support that mission?

Ambassador Pyatt: So, we are at a high point in terms of the U.S. – Greece military relationship. That was reflected in October when Secretary of State Pompeo was here and he signed a revised and expanded Military Defense Cooperation Agreement. We work together all around this critical theater from Alexandroupoli to Larisa to Stefanovikeio, but Souda Bay really is the flagship of our military cooperation. It’s a unique asset, unique in the 6th fleet AOR but also important not just to European Command but also to Central Command, to Africa Command. It is located in a strategically vital Eastern Mediterranean region where we are dealing now with the return of great power competition.  But this is a very important facility with a critically important mission that we could not do without the partnership we enjoy with our Greek allies.

AFN: Now, how does NSA Souda Bay support the strategic missions and plans of the U.S. Armed Forces?

Ambassador Pyatt: So, Souda Bay is a critical asset for the projection of American power in the Eastern Mediterranean. It’s unique because of its geographic location, but also because of the partnership that we enjoy with Greece; a unique facility to have the collocation of the peer that we’re on today with a carrier capable peer located right next to an all-weather air field, and one of the things that really set Souda Bay apart as well is the quality of partnership we have with the Greek allies here. We couldn’t do anything without the support and enabling capacity that our Greek allies provide, so we are really grateful for that as well.

AFN: What kind of long term advice you have for service members of NSA Souda Bay and for future personnel who will be stationed here.

Ambassador Pyatt: So, first of all, Souda Bay is a fantastic location to be stationed at. There’s this — 330 days of sunshine, the fantastic hospitality of the Greek people, the filoxenia,” the fantastic food, the unique culture of Crete. I always say to American friends that the Crete is the Texas of Greece. It’s a little bit bigger, a little bit louder than everything else in the rest of this country. Cretans are very proud of their history; they are proud of their food, and watch out for the tsikoudia because it has a kick.

AFN: Do you have any holiday wishes for the sailors, airmen and soldiers stationed on board?

Ambassador Pyatt: So, I wish the very best for Christmas and a very successful and peaceful 2020 to all the sailors, airmen and soldiers who are here at NSA Souda Bay. Your mission is more important today than it’s been in many, many years, and I know I speak for the President and all of our national leadership in expressing profound appreciation for the mission that you’re accomplishing here and also gratitude that we are able to work together to support American strategic interests in Greece. So thank you very much, happy Christmas and have a wonderful New Year.