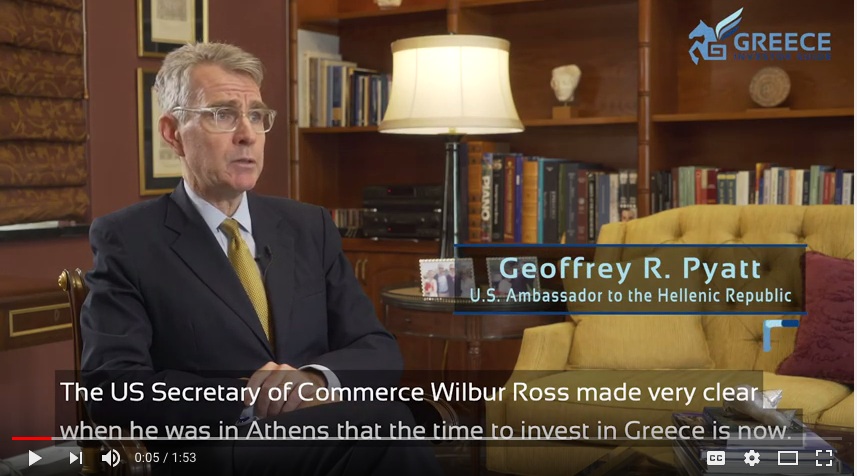 The U.S. Secretary of Commerce Wilbur Ross made very clear when he was in Athens that the time to invest in Greece is now.

That’s the view of the United States government. It reflects our strong interest in the success of this country and the success of Greek economy, but also our confidence in the signals that we’ve been getting from Prime Minister Mitsotakis, from Development Minister Georgiadis and the whole Greek team — because it really is an exceptionally talented group of people, a government which has an exceptionally strong relationship with the United States, which has committed to continuing to implement the kind of reforms that we believe will help to ensure Greece remains competitive but also help to build the ties between our countries.

There is a lot happening in the Greece-U.S. investment story, and we see a great deal of dynamism leveraging both the resources Greece has but also the opportunities now that Greece has emerged from the economic crisis.

It enjoys the stability of being part of the Eurozone, the transparency, the rules that come with being part of Europe, but also the price and cost advantages that come from a country that has had a decade of economic crisis and internal deflation.

So we see fantastic human capital, first and foremost.  It’s the thing that impresses me all the time about Greece.

Usual rules apply – find strong local partners, and Greece has a strong entrepreneurial tradition.  A lot of it is just following the usual rules but I think also my other bit of advice, especially in recent months, recognizing the important changes that come with the new government is move now. The time to invest in Greece is now.

That is the position of the United States government and we believe that this is a moment of particular opportunity.