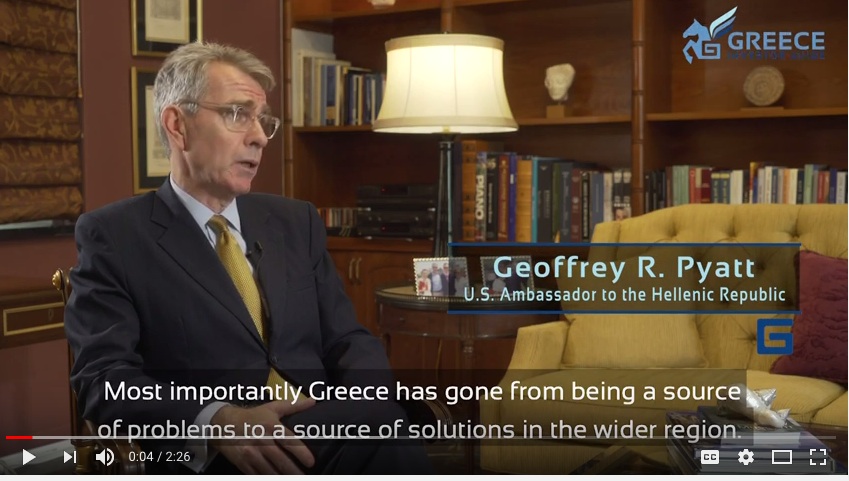 It’s been a very dynamic three years in Greece.

Most importantly Greece has gone from being a source of problems to a source of solutions in the wider region.

The economy after a long crisis has begun to recover.

The banking system has stabilized, the unemployment has begun to decline.

Greece has now elected its first government of the post-crisis era.

It’s a government which is reformist in its orientation, strongly committed to sending positive signals to the business and investment community, reducing red tape, creating opportunities for Greeks to create and grow but also creating an environment that draws great attention from the United States and U.S. investors.

It’s a very exciting time in the Greece – U.S. relationship.  We are very excited about how we can work with Prime Minister Mitsotakis and his team. In many ways it’s a new country. Very pragmatic, forward-looking, focused on solutions, focused on outcomes.  We have great confidence in the converging interests between Greece and the United States. We both want to see a region which is firmly a part of Europe but also provides this bridging role, and Greece is unique in this regard.

It’s a country with longstanding and historic ties to the Eastern Mediterranean, to the Maghreb, to the Levant, but it’s also a country, which has proven its European credentials. Greece has chosen Europe, which was something tested through the economic crisis, and Greece has come out of that crisis with a strong commitment to its relationship with us, with NATO, but also its relationship with Europe and the European Union.

So I think it’s poised to play a very important role as the United States, in turn, is trying to focus more systematically on how we advance American interests in Southeastern Europe, and that’s reflected in the level of attention that Prime Minister Mitsotakis’s government is getting from my government in Washington.

The United States sees Greece as a key ally in a strategically challenging region.

It’s a longstanding partner and ally that has been with us through thick and thin. It’s a pillar of stability, a country which enjoys a strong and stable economy and which can play an important role in the strategically dynamic region of Southeastern Europe and the Eastern Mediterranean.