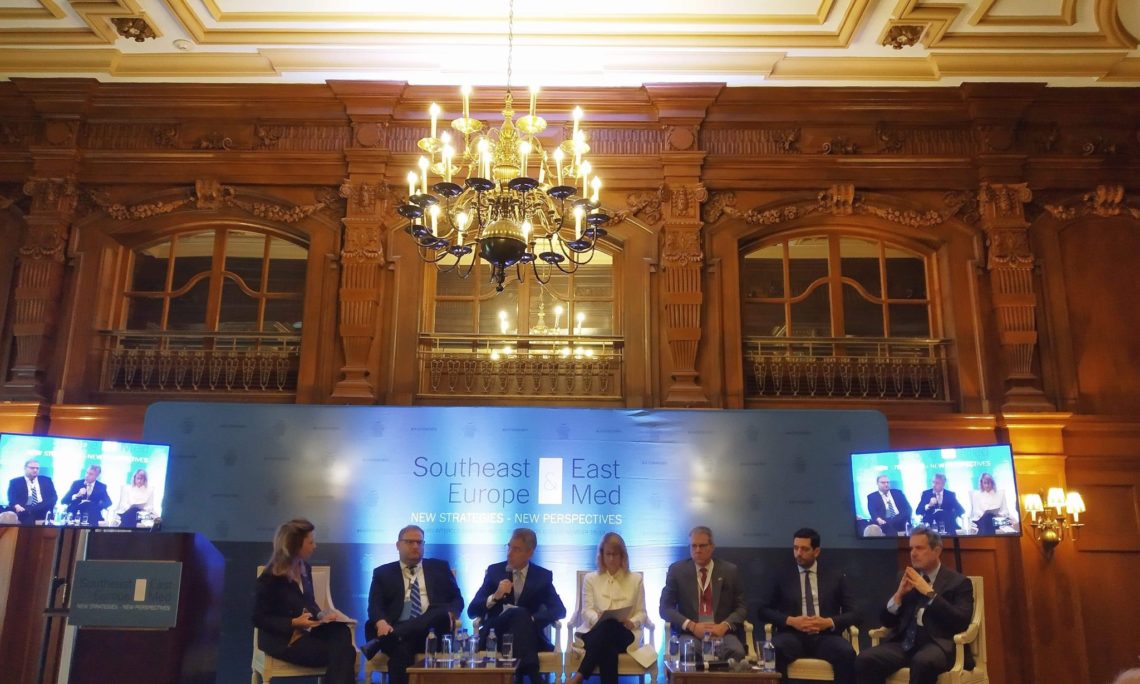 Moderator:  …How do you think we can move forward [inaudible]?  What makes sense for such a relationship [inaudible]?  And further institutionalize with specific security guarantees and [inaudible].

Ambassador Pyatt:  First of all I would emphasize that, as somebody’s whose been on the ground watching this process for more than three years now, it’s really remarkable the acceleration that we’ve seen since July 7th.

We had a very good relationship under the previous Greek government.  Under this government we are very quickly taking that relationship to the next level.  A lot of it’s driven from the Prime Minister, whether our updated defense agreements, progress that we’re seeing in terms of our deepening energy relationship, and the really remarkable convergence which Ambassador Lalacos alluded to in terms of how we work together.

As I look out over the next couple of years in U.S.-Greece relations I think one of the themes that you’ll see more and more of is the United States and Greece engaging as real partners and allies, to tackle difficult issues in the wider neighborhood.  You see that certainly in the Western Balkans where the United States and Greece agree strongly on the importance of seeing all of these countries continuing to move towards their Euro-Atlantic future, pushing back on the significant malign influence of Russia in particular, Russia’s efforts to undermine the church, Russia’s meddlesome activities in countries from Montenegro to North Macedonia, Russia’s desire to capitalize on the setback which President Macron and the European Union delivered last month when they decided to delay the progress of Albania and North Macedonia towards EU membership.

I’m sitting next to Heather because she and I, we started discussions about two years ago, trying to think more systematically about what a forward-leaning U.S. strategy for the Eastern Mediterranean would look like, and I’m very pleased about the progress we’ve made on that.  You saw how prominently the issues figured in Secretary Pompeo’s visit to Athens.

But I think the story for the next couple of years is sort of how we come together as allies, as partners.  And I think Ambassador Lalacos’ question about what does Greece get out of this — I think the best answer was given by Foreign Minister Dendias and his very clear emphasis on the benefits that Greece feels, for instance, and Defense Minister Panagiotopoulos as well, the benefits that Greece derives from for instance having a more prominent U.S. military presence in Stefanovikio and Larisa and Alexandroupolis.

So I’m very comfortable about the trajectory we’re on, but also I want to emphasize that none of us is sitting on our laurels at this point.  We’re going to keep working on it.

First of all, thank you Konstantinos, for putting that spotlight on the work the embassy has been doing on the issues of high technology, investment.  I said in my first days in Greece this is an issue that came naturally to me as a Californian.  I was delighted that we had Governor Kounalakis here yesterday.

I just want to note two things.  First of all I should have said and sort of brought this issue out in part because we have Minister Dimas and others who will talk about this later this morning, but for the United States one of the priorities that we will be working on in the next couple of months is how to deepen our bilateral partnership, our high technology, innovative economies and investment.  We will do this through the vehicle of a Partnership Opportunity Delegation which Lieutenant Governor Kounalakis and Minister Georgiadis alluded to in their comments last night.  The State Department initiative planned for February is to bring a large delegation of U.S. technology companies to Greece to help lift up what’s already happening, which we argue has not gotten enough attention.  And there is a lot that is already happening in terms of American investment in technology.

You’ve seen the news in terms of Pfizer’s Artificial Intelligence Center in Thessaloniki.  Cisco has announced in conjunction with the City of Thessaloniki a new technology hub in that city.  On Thursday I had the opportunity to visit the Deloitte Innovation Center in Thessaloniki which is a project which already has a 200 head count and will grow up to 500, which is aimed to leverage the enormous reservoir of human capital which Greece enjoys, and to develop Greece as a major hub for servicing clients worldwide in the high tech innovative economies.  I talked to another top tier American company here yesterday which is also looking at a significant investment in Greece.

So I think a lot of this is already happening.  There have been clear signals from Prime Minister Mitsotakis and his government in terms of the priority here.

I would just share with the group, Pfizer in particular, I have worked closely with the CEO of Pfizer, going back to their role as one of the flagship U.S. companies at the Thessaloniki International Fair in 2018, helped by the fact that the CEO of Pfizer is a Greek-American, Albert Bourla who has become a good friend.

But in the summer Albert brought the entire board of directors and senior managers of Pfizer to Greece and I had the opportunity to spend a couple of days with them.  They got the elevator pitch from Prime Minister Mitsotakis who is your most persuasive advocate for foreign investors in Greece.  And it was interesting to me talking to all of these CEOs and board members mainly from New York on the margins of the event, and they all basically said some version of, you know, we did this investment in Greece because Albert wanted it and he’s the leader of our company, but now having seen how much is going on here and having seen what a convincing case the Prime Minister made, I can’t believe we didn’t do this earlier.

And I think that’s a really important message.  American companies are seeing that the return of Greece is real, that the value proposition that Greece offers is substantial, and that there is now a government which is clearly demonstrating its intention to move ahead as fast as possible, including in areas like high technology that have not previously been associated with Greece.  And I’m proud of the fact that the U.S. government, our embassy, Secretary Ross and the team at the Department of Commerce, but also importantly all of my bosses at the State Department have been real advocates of this as well.  I think it will make a difference.

Moderator:  I have to ask a tough question, too, and this has to do with the challenges for something that might derail the good trajectory of the U.S.-Greece relationship.  I want to ask all of you from your perspective, what that might entail.  What can you see as a situation as a challenge that might derail the future trajectory that the U.S.-Greece relationship has been on? And I can offer some thoughts on that…

Ambassador Pyatt:  I think the biggest risk is that we just don’t move fast enough and we don’t recognize the opportunities before us.  I think that’s as much an issue in Athens as it is in Washington, DC.  But again, simply not working hard enough is the biggest downside, risk I see.