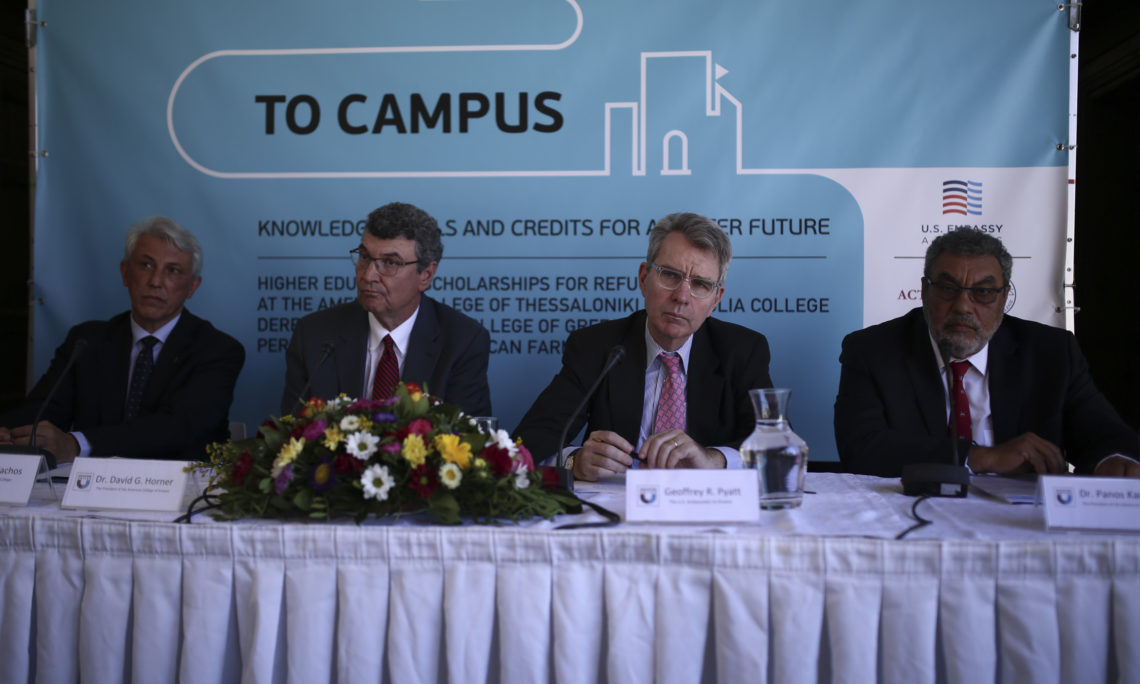 “Education Unites: From Camp to Campus”

Kalispera.  Thank you, thank you, Eleni.  First of all, let me say what a pleasure it is to be here both with my colleagues; I’m the only person on the panel who doesn’t have the word “Doctor” in front of his name, or a PhD – but Dr. Horner, Dr. Kanellis, and Dr. Vlachos. I should note I’ve been on all three campuses in the past week, which is a reflection of my very strong commitment to our relationship as the U.S. Government with these three historically American-affiliated institutions.

I’m also delighted to be here at the Benizelos Mansion.  I actually heard about this project first from Archbishop Ieronymos.  The Church was good enough to give me a walkthrough very soon after it had opened.  It’s been beautifully restored, and I really commend the Church for the work they’ve done to preserve this little piece of Old Plaka here.

But our real purpose in being downtown today is to announce a project that is very close to my heart.

When I arrived in Greece last autumn, one of the first public events that I did was a project called Hack the Camp that we conducted with some of our partners to empower people from the local refugee community.

During that Hack the Camp launch, I heard the story of a young woman who had had her education interrupted when she was forced to flee her country.  She talked about how much she wanted to have the opportunity to go back to school.

Unfortunately, that’s not an isolated story.  Hers is typical of the experiences of these people, tens of thousands of people who’ve been forced from their homes, and hundreds of college-age refugees in camps and shelters throughout Greece who have been forced to put their hopes for education and professional development on hold.

We wanted to do something to address that problem, which is what brings us to this project, which we are calling “Education Unites: From Camp to Campus.”

This is a refugee scholarship program, which is just one part of the United States’ comprehensive effort to support Greece in responding to this refugee emergency that Greece has experienced over the past two years.

The intention, our goal, is to give displaced young people the opportunity to attend college, to gain essential knowledge and professional skills, to reenter a normal academic environment where they can interact with other students, and think about their futures.

When we started putting this together, the logical partners were these three American-affiliated institutions, which we have worked with for decades, and as I said I am extremely proud of the legacy that these three schools represent of American support for Greece and for the people of Greece.

But I was particularly gratified that, as we approached the leadership of these institutions, Deree – the American College, the American Farm School, and Anatolia College, all three responded enthusiastically to our proposals.

So with their support, we are delighted today to announce that the U.S. State Department will provide 200 scholarships for refugees to take four courses in the Fall of 2017 and Spring 2018 semesters.

The academic credits that they will receive from these respected institutions will be transferable to any college they might choose to attend in the future, including other European institutions in other countries.

I’ll let the three college presidents share more information about the courses available and the admission and selection process, but I want to emphasize how honored the U.S. government, the U.S. Embassy is to partner with these institutions as we develop this initiative.

These institutions represent excellence in education; they promote an American approach to education abroad; and they have built an enduring partnership between the United States and Greece over many, many years. They are one of the most important manifestations of our legacy of involvement in this country.

They are also institutions that consistently have demonstrated their commitment to help Greek and international students receive the highest level of education.

So I want to thank all three institutions: our partners at the American College of Greece, the Farm School, and Anatolia College, for your enthusiasm and support of this program, and I want to thank all of our media partners for joining us today, and I hope all of you will help us spread the news about this amazing and important new program.

Thank you very much.  Ευχαριστώ πολύ!