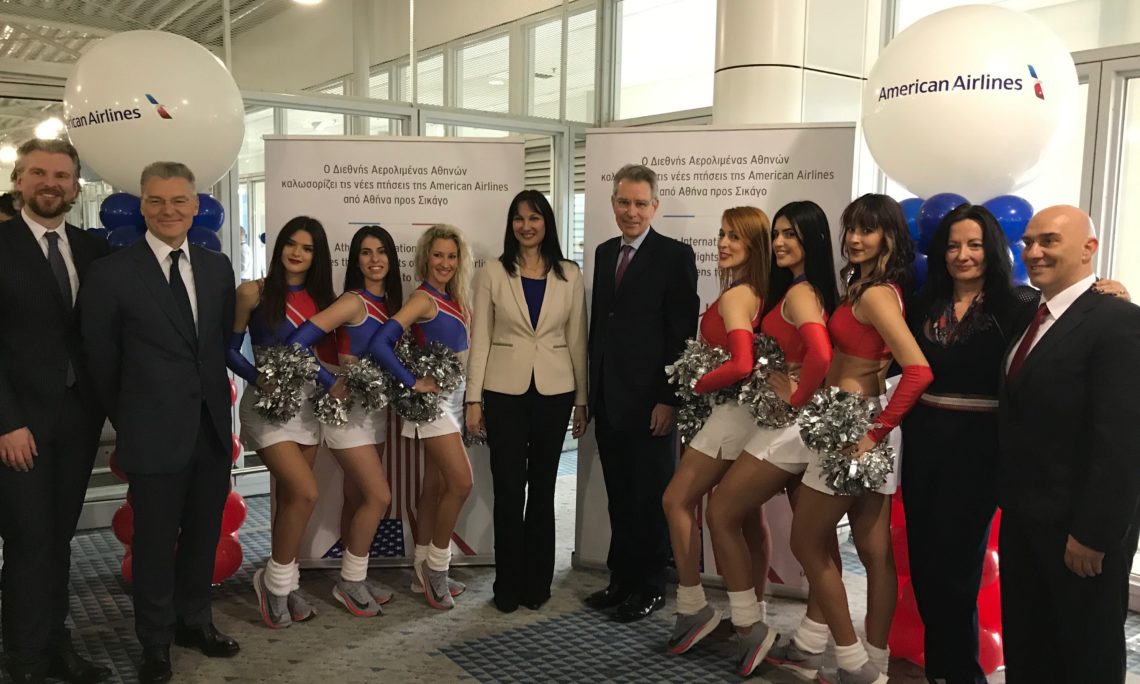 Καλημέρα σας. It’s a great honor for me to join Minister Kountoura here as we celebrate the very first non-stop flight between Chicago and Athens. And while we’re at it, I want to join the Minister in also congratulating Giannis and the whole airport team on all the kudos that Athens International Airport continues to win.

A really important part of the story here, of course, is the growth of the tourism sector over the past few years in Greece, and a lot of that credit goes to Minister Kountoura and the hard work that she and her team have put in. I want to congratulate them but also thank her for her great support of the strategic relationship between Greece and the United States.

As a result of the ministry’s efforts, the market in Greece as a year-round destination in 2018 broke all previous records and saw an extension of the tourism season, and a lot of that growth has come from the United States.

Greece, of course is famous for its φιλότιμο, and the ministry is spreading the word about a secret that all of us who live here know: that this country, with its unique crystal clear waters, its winding mountain paths, its rare and brilliant light, its fantastic food, is something very special.

And I’m especially glad to see that this city Athens, which has been my home for the past three years, is finally getting the recognition that it deserves as a destination unto itself.

Athens’ recent win as Europe’s Leading City Break Destination shows that this is much more than just a pit stop on the way to the islands. It’s a dynamic city with a unique cultural heritage, a vibrant artistic community, entrepreneurial and hospitality services, and a mouthwatering restaurant scene.

Greek immigrants began arriving in Chicago in the 1840s, many from Laconia, from Arcadia, and from the Peloponnese. They worked hard, contributing to Chicago’s growth while retaining the spirit of their homeland.

With this new route, it’s also going to be easier than ever for Greeks to reach the heart of the American Midwest, a city famous for its iconic skyline, its deep-dish pizza, and for the National Hellenic Museum in Greektown, the only major museum in the United States dedicated specifically to the Greek diaspora journey.

I’ve been very proud to visit Chicago every few years in my official capacity, and I can tell you it’s a very special city in the United States. It’s also a great jumping off point for further exploration of the United States and is the origin of the famous Route 66, which begins in Chicago and finishes up in my own southern California.

In this regard, this new American Airlines route connects two great hubs of the Hellenic world, acknowledging the importance in our relationship of the people-to-people ties, what I like to call the “secret ingredient” of the strong and enduring U.S.-Greece relationship.

The Chicago-Athens route adds to American Airlines’ other non-stop from Philadelphia, and I applaud all of these efforts to increase direct flights between our two countries and hope that these seasonal offerings will soon grow into permanent, year-round flights. As an avid traveler, I can personally vouch for Greece and America’s diverse, dramatic beauty and bountiful tourism offerings in all seasons.

So, ευχαριστώ πολύ and καλό ταξίδι to all of today’s passengers!