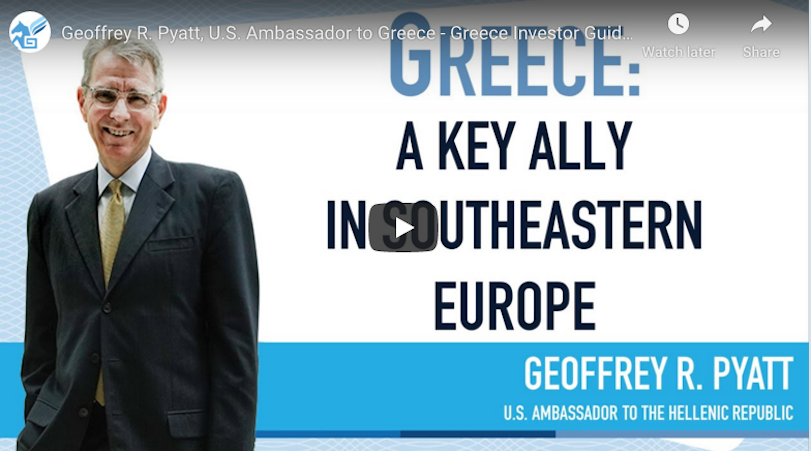 GIG: You have been the U.S. ambassador to Greece since 2016. Over that time, what turnaround have you seen take place in Greece?

Ambassador Pyatt: Since I arrived in Athens more than three years ago, Greece has transformed itself from a source of problems to a source of solutions on the international stage: a pillar of stability that shares key strategic goals with the U.S. in a challenging region; and a guardian of significant regional energy, commercial, and communications resources. There’s no more talk of Grexit. Greece has successfully exited its bail-out programme, and the banking system has stabilised with steady deposit inflow trends since 2016, consistent GDP growth since 2017, a return to capital markets at competitive interest rates in 2019, and unemployment at ten-year lows.

Relations between the United States and Greece reached an all-time high in 2019. We saw increased tempo on the energy front, including the completion of TAP, the start of construction on IGB, finalisation of a deal to build an FSRU LNG terminal in Alexandroupoli, and increased U.S. liquefied natural gas (LNG) imports through Greece’s expanded Revithoussa terminal. U.S. investment interest continues to grow in tourism – with two very well-known American gaming companies having competed for the long-awaited Hellinikon project and the process now moving ahead – and we welcomed recent announcements from Pfizer on the creation of a digital research hub in Thessaloniki and from CISCO on the creation of an innovation centre in the city. We have also seen major advances in our defence and security relationship. The U.S. Army funded a $2.3 million project to remove a sunken dredger from the port of Alexandroupoli to increase the port’s attractiveness for commercial investment and to support our bilateral and NATO military activities. Also important was the implementation of the $1.5 billion F-16 upgrade programme, along with many other achievements. The legacy of the U.S. presence at the 2018 Thessaloniki International Fair continues with many success stories from Greek start-ups and entrepreneurs – part of our amazing people-to-people ties. Across all these areas of cooperation we need to capitalise on this momentum and reach further, both in the public and private sectors.

GIG: What do you believe to be Greece’s greatest wealth?

Ambassador Pyatt: I think that Greece’s greatest asset is its fantastically skilled, highly educated, curious, and warm-hearted citizenry. The success of Greek diaspora around the world is one sign of Greek tenacity and resourcefulness. Another is the speed with which a new generation of Greek entrepreneurs has embraced start-up culture as a vehicle for their talents. Dr Albert Bourla, Global CEO of the U.S. pharmaceutical company Pfizer, and a son of Thessaloniki, along with Panos Xenokostas, Founder of the Greek-American company Onex – that breathed new life into the Syros shipyards – are just two examples of this tremendous human capital.

Greece also has an incredible wealth of natural resources that holds great promise for large-scale investment, including Eldorado Gold’s billion-dollar mine at Skouries, the ExxonMobil consortium’s hydrocarbon exploration in the waters off of Crete, and the GE technology wind energy park in Kato Lakomata. If developed properly, using responsible, sustainable practices, and with close coordination among government, industry, and local stakeholders, these investments can be a major win for the Greek economy.

GIG: The past few years have resulted in a strengthening of Greek-U.S. ties. What are the key factors behind this?

Pyatt: We have arrived at a moment when there is a particularly favourable alignment of U.S. and Greek interests. Our military stakes in the eastern Mediterranean and the return of great power competition to this region is something American security planners essentially took for granted for many decades. The Prespes Agreement also had a positive impact on Washington’s perceptions of Greece as a regional leader. There’s broad political support on both sides of the Atlantic for advancing our alliance and a new consensus in Greece. According to recent polls, 73% of Greeks view the U.S. as their most desired primary ally. There’s also remarkable continuity in Greek defence and foreign policy thinking between the government and the major opposition. In terms of leadership, Prime Minister Mitsotakis and many of his cabinet members have studied, lived, and worked in the U.S. We worked well with the previous government, and we are already working closely with the Mitsotakis government to take another strategic step forward together. In general, the U.S. and Greece have always enjoyed extraordinary people-to-people ties, but this was particularly important through the crisis years. The strong Greek-American community is a very good reminder of what a powerful force multiplier the diaspora can be.

GIG: Greece elected a U.S. educated leader in its last elections. Looking ahead, how do you see this change in leadership shaping ties between the two nations?

Ambassador Pyatt: Greece plays an important role in a challenging and dynamic neighbourhood. Besides the still unsettled situation in North Africa, Europe contends with flows of unidentified migrants and a new threat landscape with terrorists who are constantly adapting. On top of this, Russia’s invasion of Crimea, its continued military aggression in eastern Ukraine, the Skripal incident, the thwarted coup attempt in Montenegro, and its efforts to scuttle Prespes by meddling in Greek politics are all major areas of concern, to say nothing of the risks to the European security environment from Russian interference and disinformation.

Given this context, it is easy to see why the United States has made the strategic judgment that Greece is a critical partner as we seek to build stability and prosperity in this complicated region. Greece is a steadfast NATO ally who has consistently maintained the alliance’s 2% of GDP defence spending benchmark and is also one of only three countries allied with the United States in every major international conflict of the 20th century. We commend Greece’s leadership in promoting prudent, diplomatic relations in the region, and in supporting its neighbours’ efforts to move towards, and remain within, Euro Atlantic institutions. Like Greece, we are concerned about maritime security and the stability of the eastern Mediterranean. We are convinced that it is in our joint interest to keep Turkey anchored in the West. We also look forward to continuing to support the 3+1 Greece-Cyprus-Israel framework, which Secretary Pompeo joined for the first time in March 2019.

GIG: Early moves by the government point towards Greece building upon the so-called 3+1 cooperation initiative. How can U.S. involvement contribute to boost stability and common interests?

Ambassador Pyatt: We applaud Greek leadership in strengthening ties with its neighbours, especially through ongoing collaborations like the 3+1 Greece-Israel-Cyprus and U.S. framework, which has such important implications for regional energy and defence cooperation. Just as the European Coal and Steel Community facilitated energy collaboration between like-minded democratic nations after World War II, the 3+1 framework among Greece, Israel, Cyprus, and the United States has the potential, similarly, to channel the support from these nations into active political and economic cooperation. In August 2019, Assistant Secretary Francis Fannon and the energy ministers from Greece, Israel, and Cyprus identified several significant areas of common interest including infrastructure projects, renewable energy, energy storage, emergency preparedness, and environmental protection in the upstream sector and cybersecurity. The first technical working group met in early February in Nicosia to begin delivering concrete proposals to increase cooperation in these areas. When he was in the U.S., Prime Minister Mitsotakis discussed our cooperation in the 3+1 framework, and we committed to strengthen our efforts further. As the world leader on many of these issues, the United States will engage government and private sector experts to share American experience and expertise with our democratic partners in the 3+1 framework.

GIG: At the 2018 Thessaloniki International Fair (TIF) there was strong support from U.S. companies. But in practical terms, what does this mean? What key U.S. investments in Greece can you point to that have resulted from TIF?

Ambassador Pyatt: The 2018 Thessaloniki International Fair set the ball rolling in a number of business sectors, spotlighting the opportunities that Greece represents, not just as a single market but as a gateway to the Balkans and a reemerging energy, transportation, and commercial hub. Secretary of Commerce Wilbur Ross called the participation of over 55 major U.S. businesses unprecedented at an international trade fair of its type, and those business leaders expressed renewed appreciation for the potential that exists in northern Greece and beyond. At the 2019 fair, Prime Minister Mitsotakis announced Pfizer’s intent to establish a digital research centre in Thessaloniki. This is a very important and welcome investment in this dynamic region, born from Pfizer’s participation in the U.S. Pavilion at the 2018 fair. Pfizer has announced that this centre was the first of four planned worldwide with a focus on artificial intelligence and big data analytics, creating up to 200 highly skilled jobs in Thessaloniki. CISCO also used the opportunity of TIF to announce plans to establish an innovation and skills development centre in Thessaloniki.

Investments by American companies like GE in the rapidly growing renewables sector, and Tesla’s investment in a research and development office in Athens, promote a more competitive market and enhance Greece’s role as a regional energy and technology hub. Transport and logistics is another sector where U.S. investment is already making a difference. By the end of 2019, the Neorion shipyard in Syros passed the 70-ship milestone set by Onex and actually worked on over 100 ships and created 500 new jobs, and we are very much looking forward to seeing ONEX repeat this success at the Elefsina shipyard. Finally, I would also highlight significant developments in the film industry here in Greece, including the recent decision by a major American production company to become part of the international film studio near Thessaloniki – another collaboration launched at the 2018 fair.

GIG: What advice do you give U.S. investors considering investing in Greece?

Ambassador Pyatt: I’d advise U.S. investors to look into Greece’s emerging start-up and entrepreneurship sector, one that the embassy has actively supported at the Thessaloniki Fair, and countless pitching competitions and mentoring events throughout the year. The innovation wave is sweeping through every sector, and there’s clear synergy with American tech companies. Opportunities to share American know-how in tourism, agri-food, and defence also exist. American companies are expanding their footholds in Greece’s cruise, hotel, and car rental markets. In defence, American companies like Lockheed Martin, Raytheon, and ATK have established strong Greek business partnerships, with Lockheed delivering the first P-3B aircraft and commencing the $1.5 billion F-16 upgrade program last year. I think that the diaspora will be the first to agree with me about the tremendous opportunity here, and I really hope that Greek-American investors will play a leading role in Greece’s return to growth.

GIG: The U.S. government was one of the biggest supporters of the Prespes Name Agreement. What is your take on this deal?

Ambassador Pyatt: The Prespes Agreement was a peaceful, diplomatic solution reached by two sovereign, democratically elected governments. It also removed a historic irritant from the U.S.-Greece agenda. I believe the two governments’ decisions will be vindicated by history, as it removes a major impediment to the long-term interests of both countries and to the economic potential of the wider region. In this vein, we’re already seeing important conversations with Serbia, Bulgaria, and Romania about expanded regional cooperation on energy, infrastructure, and other projects as a result of the agreement. Helping North Macedonia join NATO is a key part of our shared strategy to stabilise the region, so we saw the start of Greece’s air patrols over North Macedonia’s air space as a very positive development. There have also been serious discussions with North Macedonia on energy cooperation. This is a real boost for Greece’s international standing and prestige, an opportunity to think comprehensively about growing Greek leadership in the wider Balkan region, and a reinvigorated role for Greece – and northern Greece in particular – as a gateway to the countries of the western Balkans.