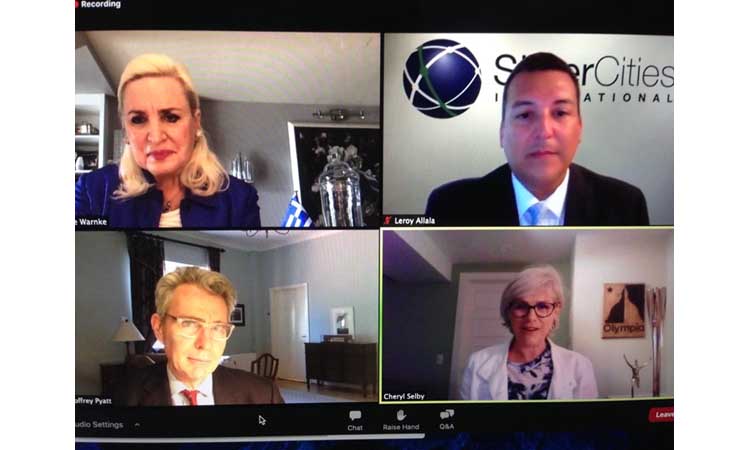 Thanks, Christine, for the generous introduction. Leroy, delighted to meet you, and more importantly, really pleased we were able to partner with Sister Cities International this way.

I’ve been an American diplomat for 31 years now, and one of the things that I have learned across my career representing the United States around the world, it’s that the people to people to people ties that really endure, and so I have made it a practice in my Ambassadorial roles to really think hard about how we can continue to deepen those people-to-people ties — whether it’s our exchanges programs, and we have a great partnership with State Department’s Bureau of Educational and Cultural Affairs and Marie Royce, who is a great Assistant Secretary there and a real partner for all of us at the Embassy in Greece, but also with programs like Sister Cities at the local level.

I’m a Californian. I’ve always been something of a fish out of water in Washington, DC. I don’t consider myself a Washingtonian, and I’m reminded of that every time I travel around the countries where I’ve been posted. You learn so much more when you get outside of the capitals, and that’s where I see the real value added that Sister Cities provides.

I’ve seen this in Greece. I’m delighted we’ve got good participation from across the United States today. I understand there are a couple of California cities represented, including my home town of San Diego, and if there’s one thing that I’d like to get done before I’m finished here in Athens, it’s to make sure we get a strong San Diego sister city relationship set up.

But I also am especially pleased — I think we have Mayor Selby — Cheryl was with me from Olympia, Washington earlier this spring just before the lockdown. She came out for the Olympic flame ceremony related to what we then thought was going to be the 2020 Tokyo Olympics, and I’m really really very grateful to Mayor Selby for the efforts she’s making to rekindle the sister city relationship between Olympia, Washington and Olympia in the Peloponnese in Greece.

But I hear these stories all the time. One of my first trips in Greece was to a little town in the center of the country called Trikala, which has a young, activist, reform-minded mayor. He was incredibly excited about their sister city relationship with Tucson. I was earlier today meeting with the Mayor of Hydra, one of the closest islands to Athens. We had a fantastic conversation about the ties between the American Revolution and the Greek Revolution, and Mayor Koukoudakis described something to me which I did not know, which is the historic relationship between Hydra and Tarpon Springs, Florida, which goes back 200 years now.

I understand we also have the Mayor of Chios on the call today — an island that I’ve gotten to know extremely well. It’s very important to the Greek shipping industry. It’s at the front lines of the migration crisis that Greece is contending with, but it’s also a city with very long ties to the American diaspora. So I’d love to talk about how we can lift up the Chios sister city relationship with the United States.

We are at a high point in terms of the official relationship between Greece and the United States. There is a government in Athens which shares American perspectives on key issues like economic reform, like regional stability. We have a tremendously important military footprint with our base in Souda Bay on the island of Crete. Again, there’s a new Mayor in Chania, the host city of our Navy in Souda Bay. I don’t know if Chania has a sister city relationship with somewhere in the United States, but it certainly should.

I’ve also talked about Sister Cities — and I have Cindy Harvey who is our Public Affairs boss on the call, also, and Cindy and I had a conversation a few months ago with the Minister of the Interior, Minister Theodorikakos. He sits on top of the Greek municipal units, and Minister Theodorikakos mentioned specifically his desire to reenergize the existing sister city relationships and see where we go from there.

I should also note the really important role that American companies are starting to play in the Greek economy. This is a country that went through a decade-long and very deep economic crisis, basically their version of the U.S. Great Depression, but after a decade of economic decline, the Greek economy is now coming back.

The Greek government did exceptionally well in managing the Coronavirus crisis. In fact, Greece is opening up now its economy. Its reopening to international tourism, which is an extremely important part of the overall economy, about 25% of GDP, but trying to do so in a way that keeps visitors safe and also Greek citizens.

So, I’m thrilled, Leroy, Christine, that Sister Cities is taking another look at Greece. You can count on my strong support, the Embassy’s strong support, and I think I can also speak for ECA and Assistant Secretary Royce in saying we have made a whole of government commitment to the strategic relationship between Greece and the United States, and people-to-people is a really lucrative and important aspect of that.

And so happy to hear from everybody, and look forward to the conversation this afternoon. And as I said, I hope we do have the San Diegans come on board and I would love to see what we can get done in that area as well, or anyone from southern California for that matter. Thank you very much.