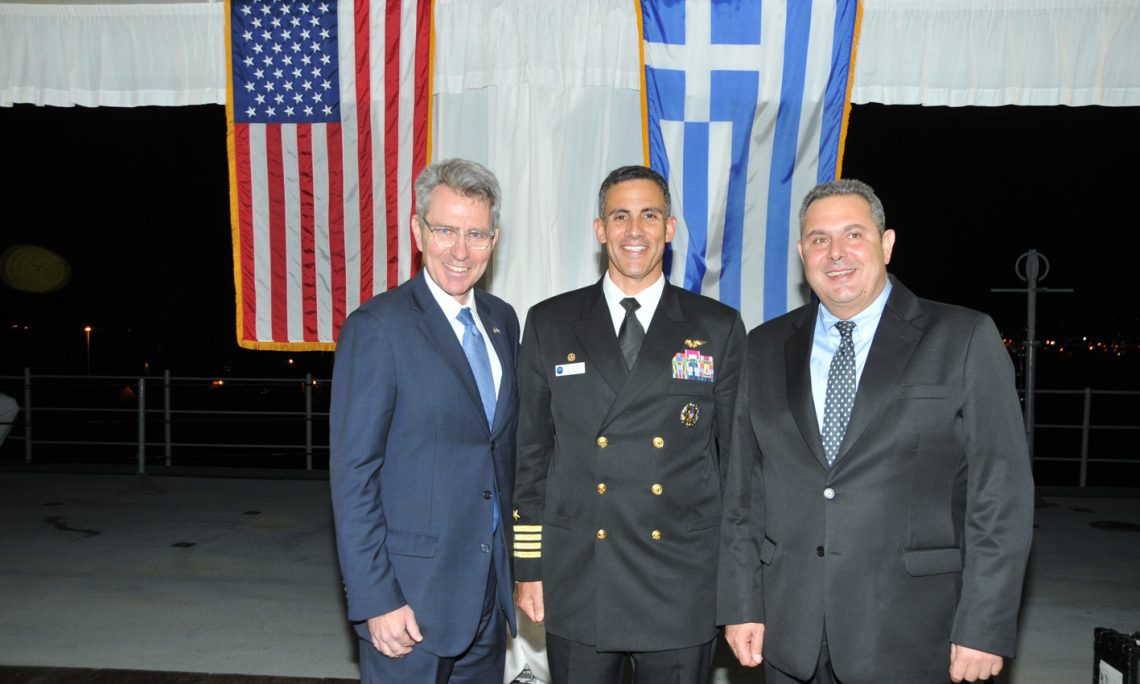 Thank you and good evening everybody.  Thank you for joining us. I especially want to acknowledge the distinguished representatives of the Greek government who are here this evening – most importantly our partner, Minister Kammenos, and the many senior representatives of the Greek Navy, air force, army, coast guard, and military services.  You honor us greatly with your presence.

I also want to acknowledge, in particular, Captain Sardiello, Commander Christopher Gilbertson, and the 600, nearly, sailors of the USS Mt. Whitney and    the USS Mason.  Thank you to all of you for your service to the country and for what you represent as America’s force abroad.

I look forward to meeting all of you who we’ve invited here this evening – some of our Embassy’s closest contacts – both tonight and in the coming weeks and months to explore how we can capitalize on the opportunities before us in the relationship between Greece and the United States.  I am certain that our work together over the next three years will continue to deepen the important alliance between our two countries.

I am very pleased to arrive in Greece at a particularly significant moment in our bilateral relationship, symbolized, in some ways, by the fact that, today, we have 3 U.S. Navy ships here in Greece, counting the USS WASP which just arrived in Souda Bay.

During my first weeks here in Greece, I have been struck by the many similarities between Athens and my hometown of San Diego, California: the fantastic weather, the beautiful landscape, and the warm and welcoming nature of the people.  My wife, Mary, and I, and I hope everybody met Mary this evening, have received such a generous welcome that we already feel like we have come home.

But San Diego and Athens also share the distinction of being two world class maritime centers – with San Diego being the West Coast home of our Third Fleet.  So, I have a special interest in the relationship between our two navies and I am very grateful to the officers and crew of the USS Mount Whitney who have facilitated our reception this evening.

Greece, of course, also has a very strong naval history.  The maritime prowess bestowed by the Ancient Greeks remains evident in the proficiency of the modern Hellenic Navy.  The United States, and I personally, am extremely proud to have Greece as our NATO ally and a strategic partner in a critically important region.  NATO is a proven alliance and a critical element of a peaceful and prosperous transatlantic region.

My very first trip outside of Athens was to our shared facilities at the Naval Support Activity in Souda Bay, Crete.  I was so impressed by the diligence and competence of our American and Hellenic service members stationed at Souda Bay, but also by their great cooperation which happens every single day.  I was privileged to see this vital naval hub first hand.  This is where Greece enables NATO’s many missions, in the Southern part of Europe and beyond.  Souda Bay is a concrete manifestation of the bonds between the United States and Greece that I am committed to strengthening and deepening.  There is no better symbol of the strategic partnership between our two countries, and I look forward to my next visit to Souda.  And, also, to many other parts of Crete, which has to be one of the most beautiful corners of all Greece.

As a Californian, I am especially honored to have been invited aboard the USS Mount Whitney, which is named after the highest peak in California’s Sierra Nevada mountain range.  Indeed, Mount Whitney is the highest summit in all of the contiguous United States.  Captain Sardiello, I imagine you must share my enormous pride in this ship and in the responsibility and honor that you have in commanding her men and women.

Commander, I thank you and your crew for your visit to Greece, and for hosting us this evening.  It has been my privilege to spend time aboard the Mount Whitney and I thank you and your crew very much for your service to the United States and to all of our NATO allies.  As a Former Ambassador to Ukraine, I also want to express my sincere thanks for the Mount Whitney’s contribution to security efforts with our allies and partners in the Black Sea.  I’m just glad that we’re celebrating this ship reception on board the Mount Whitney in the Aegean, and not in the Black Sea, in October because I made that mistake last year and it was too cold!

During my tenure as Ambassador, the United States will continue to work with Greece to support the peaceful prosperity of the Mediterranean and Aegean regions.  As partners and allies, we will work toward a more stable and secure region.  This includes our priority of working together to contain the forces that threaten our long-term vision of a Europe whole, free, and at peace.

I am extremely grateful that so many of our guests have come tonight to welcome the Mount Whitney here to Piraeus.  And I highly appreciate our partnership with each of you and your institutions.

I look forward to working with you to address our joint challenges and to find opportunities for greater collaboration.

Thank you very much for the incredibly warm welcome – ευχαριστώ πολύ.