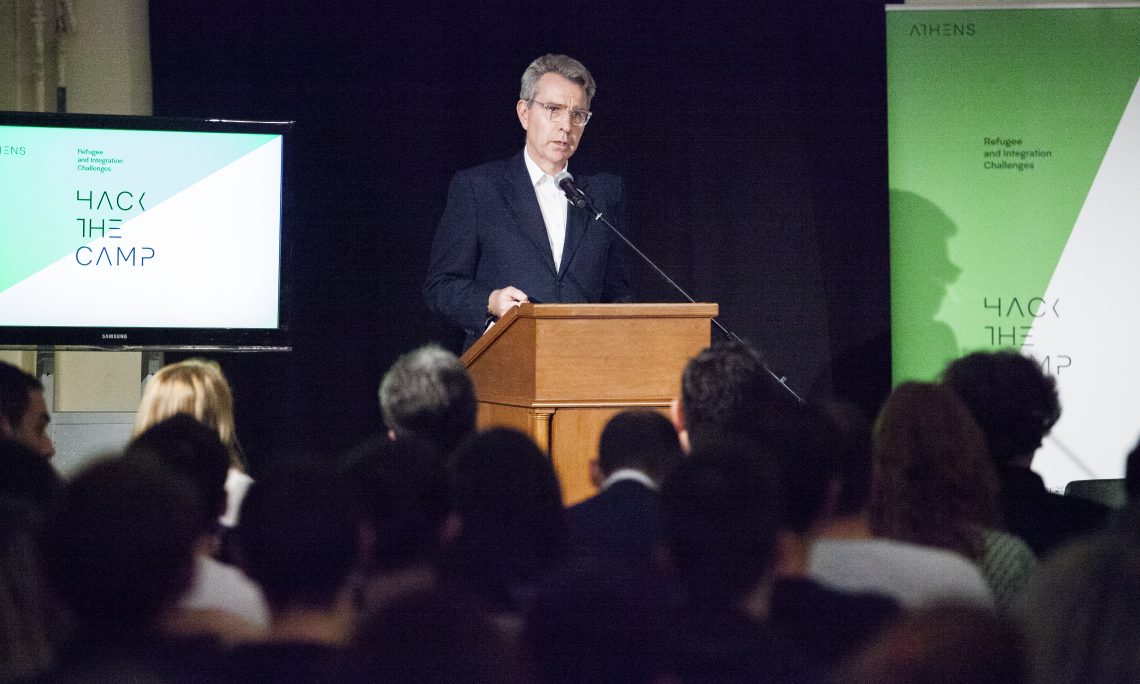 ood evening. Thank you Ayan and Andy. It’s really terrific to be here. I’ve been looking forward to this event, really, all week long. I want to thank everybody for being here to participate in this Hack the Camp program. We are all here, tonight and over the next couple of weeks, to look at how we can join forces to deal with what is one of the world’s most pressing global problems which is the refugee crisis.

But we’re also looking at this problem through the lens of what I think is one of the most powerful forces in the world today which is empowered civil society and technology. So this is an incredibly exciting combination and I’m very proud of the fact that the U.S. Embassy is able to participate among the supporters.

In the last few years, if you look at the numbers, something like 65 million people have been driven from their homes, including 21 million refugees who are fleeing war and terrorism in their countries. This is the largest movement of humanity we’ve seen around the world since the Second World War.

Greece has received thousands and thousands of refugees and has contributed significantly to the efforts to cover the immediate needs of these people. And the Greek people, at a time of economic hardship here at home, I think have demonstrated extraordinary generosity in opening their arms and their homes to help these people who arrived unexpectedly on Greek shores.

I’ve been here about three weeks, so far, and I have to say one of the most impressive things that I have seen, during that time, is the civil society groups that I have met with who have been involved in this refugee space. It’s something the people of Greece should be very, very proud of and, certainly, has made a strong impact on me.

President Obama in Washington this week made the point that we cannot expect a situation where it is Greece, Germany, Italy alone who are being asked to bear the burden of the migration crisis in Europe today. It’s simply not tenable. We’ve made clear that the United States stands behind Greece and all the other nations that are hosting refugees and migrants right now. We are committed to helping and doing our part.

The United States is the largest single donor of humanitarian aid around the world. At the Leaders’ Summit on Refugees in New York recently, President Obama announced a new U.S. contribution of 50 million U.S. dollars to the World Bank to create economic opportunities for refugees. And, in 2017, the United States will welcome and resettle 110,000 refugees which is a 60% increase over this year.

The current refugee crisis in Europe is a result of failures that have happened, often, very far from Greece – civil war, ethnic tensions. But you should know that the United States is working with our partners and allies on a daily basis to address these root causes.

For many who are here tonight, I do not have to go into detail about the heartbreaking stories of leaving behind a life, a family, loved ones and beginning the perilous journey to a new home on foreign shores. I have already met and heard some amazing, amazing stories of refugees here in Greece. Some don’t even speak the language, they have no work, they’re not able to put their children in school, and are separated from and have lost, in some cases, members of their families.

This hackathon can’t solve the refugee crisis. But I am confident it can and will make a difference in the lives of our fellow human beings. Hack the Camp is part of a series of programs that the U.S. Embassy is supporting in Greece to help refugee and migrant populations. We are happy to work with the very talented and dedicated group of people from Greek non-profit, non-government organizations – like Doctors of the World, METAdrasi, Melissa, and others to address the needs of refugees and migrant children and adults.

I am particularly happy that this hackathon is designed to give voice to the refugees and migrants themselves. As we’ve seen many times in my own country, migrants can make an exceptional contribution to their new homes by starting new businesses, helping to revitalize communities – something that we have seen in urban centers across the United States.

Coming into this neighborhood here in Athens tonight, I saw the dozens of small stores in this neighborhood that are a testament to the entrepreneurial spirit of migrants. They bring with them skills and knowledge and are committed to building a new life. That way and that’s why they can make our communities and our economies stronger. Our hope is that Hack the Camp will be integration in action; to bring together Greeks, Americans, British, Afghans, Syrians and other nationalities. Come together, share their ideas, and find solutions.

I’m very grateful to our facilitators for coming to Greece and being part of this hackathon. But I also want to shout out to our sponsors and partners here – Impact Hub, the Onassis Cultural Center – for their commitment. I also want to thank some of the companies. I know we’ve got Microsoft here this evening, ELLAK, and some of the others who’ve supported Hack the Camp. And, of course, special thanks to all the mentors and experts that share their knowledge and insights. Their contribution is what makes this all work.

I want to say a special note about Impact Hub because I talked about this a little bit earlier. I was extremely proud, when I was in Ukraine, when I was Ambassador, of the work we did with Impact Hub there in support of the work that Impact Hub Odessa was doing with the 1.7 million displaced people who were fleeing the war in Ukraine. And I think it’s fantastic that there’s this global network of entrepreneurs, creative people who are being able to share experiences, tap in to the same energy of civil society, and build the kind of solutions that make a real difference in the lives of people who are less fortunate.

President Obama got at a similar idea in his own comments at the Refugee Summit. He made the point that we’re at a moment where everybody needs to do more – more institutions, more NGOs, finding new ways to deliver aid; more businesses contributing their expertise; more young people demanding action; and more states and towns and countries coming forward and saying yes, we will open our homes and our communities to our fellow human beings in need.

So, I want to wish you the very best of luck. I’m going to pay a lot of attention to how this process unfolds over the next couple of weeks. I’m very, very excited to see what comes out of the process in December and I hope that you will hack away and build a better future for all of us.