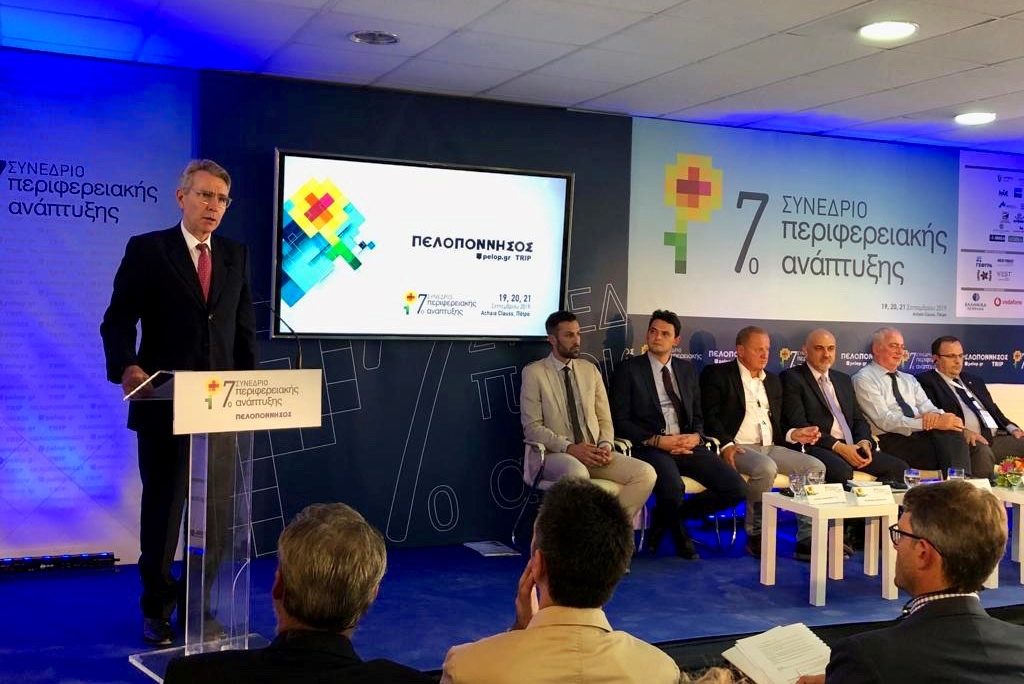 Καλησπέρα σας.  Minister Georgiadis, panelists, friends, thank you for inviting me to speak with you today about a new development model for western Greece. I’m particularly happy to be back in Patra, Greece’s Gateway to the West, and a city that I have come greatly to appreciate over the past few years.

I’m particularly glad to be back here at Achaia Clauss, in what I believe is one of the most beautiful wineries in Greece, and I want to thank Nick Karapanos and his family for hosting us, and of course I want to thank Peloponnisos and its publisher Mr. Louloudis for the invitation to be here today.

Minister Georgiadis and I rushed over here from a roundtable discussion in Athens about the government’s reform agenda and how to attract more foreign direct investment.  It was a fantastic event that reflected the tremendous progress the government has made in its first 75 days, but also the renewed appetite that we are seeing for investment in Greece.

As our Secretary of Commerce Wilbur Ross made clear during his recent visit to Athens, the United States is “maximally bullish” on opportunities today for American investment and trade with Greece.  Investors are seeing positive signals across the Greek economy, from energy to agro-tech to infrastructure and transportation, healthcare, farming, tourism, and of course the emerging knowledge-based and innovation sectors, where Michalis’ organization has worked so closely with us at the Embassy.

From an American perspective, the time to invest in Greece is now. And that’s why Secretary Ross will host a business roundtable for the Prime Minister and Economy Minister Georgiadis next week in New York with a broad swathe of top American companies, capitalizing on the recent progress here and emphasizing strong U.S. support for Greece’s success.

I know from my conversations with the Hellenic American Chamber of Commerce, with SEV and many business leaders, that there are, of course, concerns about bureaucratic obstacles to growth. So, for this reason, we commend Prime Minister Mitsotakis and his team on their commitment to collaborating with the private sector, to digitize government, to slice through red tape, and push through investment-friendly reforms, as reflected in the new law, recently introduced in Parliament.

I was really encouraged by the strong participation in this morning’s Delphi Panel, and by the fact that these kind of discussions are now happening at both the national level but also in regional centers like Patras and Thessaloniki.

The United States government wants to do everything that it can to assist in Greece’s full economic recovery, which is why I am here today to highlight the great potential I see in this beautiful and economically significant region of Greece.  Or, as my friends at Pelopponisos wrote back in May, I want to share a little about “What the U.S. Ambassador Knows about Patras that most Greeks do not know.”

I’ve seen fantastic research and technology developments in this city since I first arrived in Greece in 2016.  Just like Thessaloniki and Athens, Patras exemplifies the centers of excellence that Greece has cultivated in the digital economy.  The concentration of public universities here and the technical institute has created a thriving scientific center with an energetic and capable student population.

It also has, as my friend Alexandros Samaras has taught me, Greece’s best architectural school, which is quite an accomplishment in the country that gave the world the architectural perfection of the Parthenon.

On my first visit to Patras, at the University in 2017, I was able to meet Dr. Konstantinos Poulas and his research team at the Laboratory of Molecular Biology and Neurobiology, where he shared their cutting-edge research and practical applications that were emerging from the pharmaceutical sector.

Meeting them with so many talented young scientists, and especially young women, who were leading in the field of STEM, gave me great hope for Greece’s future.  And to this day, I remain convinced that Greece’s highly educated, compassionate, intellectually curious, and ground-breaking human capital is one of this country’s strongest assets.

The Patras Science Park is another must-see destination whenever I visit western Greece.

For over 15 years, the park has supported the growth of innovative, technology-focused companies across several sectors such as information and communications technology, biotechnology, clean energy and other industrial technologies, all of which have a strong private sector and applications orientation.

I’m so impressed by the companies I’ve met at the Science Park, which cover the full spectrum of innovation from chip design and computer performance to fuel cells and maritime infomatics.

One of these companies, Think Silicon, specializes in designing extremely small, ultra-low power, high-performance microprocessor cores.  Think of your small fingernail and a little piece of that, and that’s their expertise. Based in Patras, the company has sales offices in San Jose, California, the heart of Silicon Valley.

Helbio is another innovative energy technology company that is revolutionizing fuel cell technology and has established a leading position worldwide in hydrogen production from bio-fuels.

On my last visit to Patras, I also met Advent Technologies, a Greek American company with headquarters in Boston that specializes in fuel cell and energy storage technologies.

One of Advent’s co-founders, Patras native and current CEO Dr. Vasilis Gregoriou, studied in the U.S. and built over 20 years of experience in the American market.  But then he returned to Patras to open a research and development facility, leveraging his students and the human capital here.  Advent showcased its technology as part of the U.S. Pavilion at the 2018 Thessaloniki International Fair.

These are all examples of how partnerships between our countries strengthen people-to-people ties, build off the inquisitive, innovative mindset that our countries share and advances the U.S.-Greece relationship.

Both Helbio and Advent work in the energy sector, a sector that we have prioritized in our relationship with the Mitsotakis government.  With their advances in fuel cell technology, these companies are proving just how Patras can play a leading role in Greece’s energy sector.

I am confident also that Patras’ proximity to renewable energy sites like the new wind turbine park in Kato Lakomata using GE turbines will facilitate future partnerships.  The United States leads the world in renewables and energy storage technology, and we have our eye on Patras.  And I will do everything that I can to spotlight the wealth of investment opportunities and talents that this region offers.

Sharing American know-how and best practices to help startups was one of the focuses of the renewed American presence at the Thessaloniki International Fair earlier this month.  It’s also part of an ongoing American Embassy push to help nurture Greece’s emerging culture of entrepreneurship and innovation.

And besides being the administrative center of Western Greece, Patras has already made a name for itself as Greece’s beverage capital and its thriving industrial hub.  Industry leaders, that I enjoy consuming, like Coffee Island, Krinos, Loux, Coca Cola, and Athenian Brewery, were all either founded in Patras or have operations here.

The city’s busy port, which connects Greece with Italy and the rest of Western Europe, will be a very important asset in TAIPED’s third phase of privatization.  And I very much hope that conditions will allow American or European investors to participate.  At the same time, rail and road links joining Patras with Athens, like the Olympia Odos, have dramatically shortened travel time to the Greek mainland.

And as I have discovered over the past three years, Patras and western Greece also have a great deal to offer as a tourist destination.  In addition to the ultra-modern archaeological museum, the historic castle, and the Roman odeon, the city boasts an active sporting and events calendar, including my favorite, the Tour of Sacrifice bike race from Patras to Kalavryta, and the recent Mediterranean Beach Games.  And it’s the gateway to ancient Olympia, one of the best secret Greek historic sites and one that should be much better known in the United States.

The last time I visited Patras, I also attended the inauguration of the new Moxy Hotel, the first of Marriott International’s boutique hotels to open its doors in Greece. The millennial-focused hotel concept fits well with Patras’ youthful and forward-thinking community, and this important investment has already changed the profile of the marina, with a sunset that I know for a fact rivals the famous one in Santorini.  Marriott’s plans for growth in Greece reflect the strong and continued U.S. interest in the tourism sector, where we had other good news this week with the big Blackstone investment that Minister Georgiadis talked about.

So, as we look towards 2020 and beyond, I am convinced that Patras and Western Greece will play a significant role in all the sectors I’ve mentioned.  I’m always eager to share the Patras story with my colleagues in Athens. and I am strongly committed to helping this region, which reminds me so much of my native California, with its beaches and ski slopes and history – to help it accelerate its commercial growth, so I look forward to the results of this panel and coming back to Patras for the next Race of Sacrifice.  Ευχαριστώ πολύ.