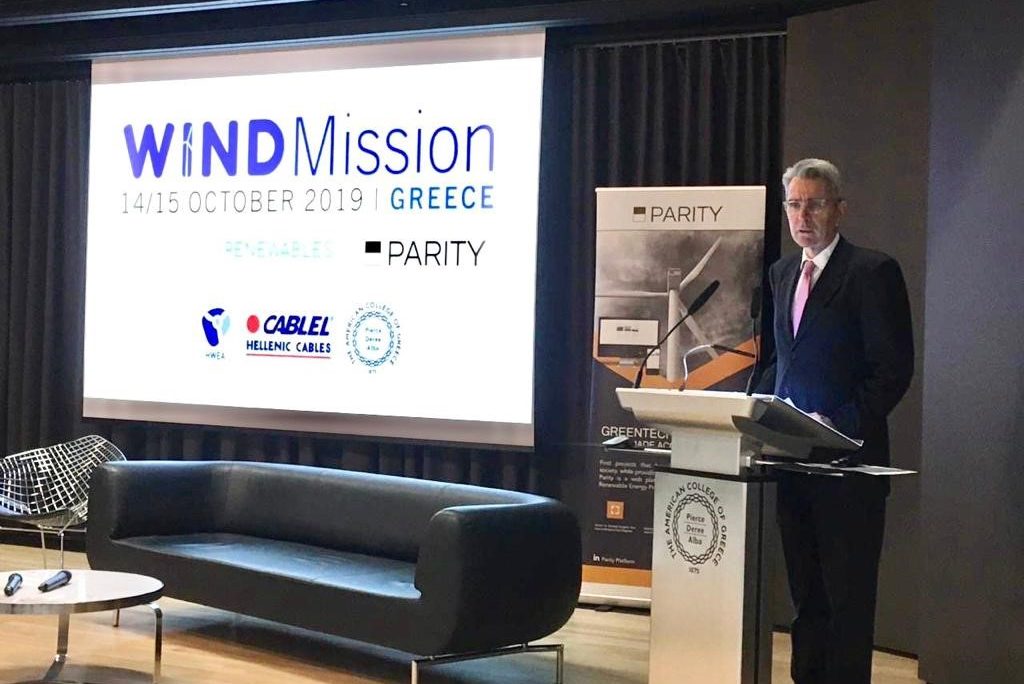 Thank you very much!  Kαλημέρα.

Thank you to The Voice of Renewables and the Hellenic Wind Energy Association for inviting me to speak this morning.  And a special thank you to Claudia and The American College of Greece for hosting this event and so many others, which promote dialogue between the public and private sectors to strengthen the people-to-people ties between Greece and the United States. And I should say also, congratulations to the American College on this spectacular remodel of your conference room here.

As the effects of climate change become clearer and more acute, wind energy and renewables are attracting serious attention and investment.  And that’s as much true here in Greece as it is back home in the United States.

So, I very much appreciate the opportunity this conference provides for stakeholders in the Greek wind energy market to meet and to share thoughts.

In his remarks at the UN General Assembly last month, Prime Minister Mitsotakis reaffirmed Greece’s strong commitment to addressing climate change as a core component of his government’s agenda.

The U.S. applauds the efforts of Prime Minister Mitsotakis and Minister Hatzidakis to adopt a national energy strategy for Energy, Environment, and Climate by the year’s end, which includes plans to close all of Greece’s lignite power plants by 2028, another example of this government’s resolve to think big and act boldly.

As the Prime Minister remarked, this agenda is not just a defensive strategy, but an opportunity to leverage Greece’s wealth of natural resources as a competitive advantage and an opportunity for large-scale investment.

If developed properly, using responsible, market-based practices, with close coordination among government, industry, and local stakeholders, these investments in renewable energy can be a major win for the Greek economy.

The United States stands with Greece on renewable energy, eager and ready to help Greece achieve its renewable goals and to partner with Greek companies to develop the next generation of technologies that will deepen energy diversification.

Energy in this regard was a core component of our second U.S. – Greece Strategic Dialogue last week.

Last Monday, Deputy Minister of Environment and Energy Thomas and senior officials from both the U.S. Department of State and Department of Energy met to discuss renewables and the important role of natural gas as a bridge fuel to a greener future.

Natural gas emits substantially less greenhouse gas than any other conventional fuel, and switching from coal to natural gas has driven the largest drop in U.S. greenhouse gas emissions in recent years. As Secretary of State Pompeo recently noted, our energy-related CO2 emissions fell by 14% between 2006 and 2017.  The rest of the world’s rose by more than 20% during the same time period.  Our black carbon emissions are down 16% since 2013, and are on track to drop by nearly half by 2035, the best of any Arctic country.

The United States is achieving our reductions the American way, through scientific work, through technology, through building out safe and secure energy infrastructure, and through our economic growth, and doing it in a way that does not stifle development with burdensome regulations that only create more risk for the environment.  Compare the data of the United States to China.  China’s CO2 emissions tripled between 2000 and 2016.

And in this regard, I am encouraged that U.S. technology and resources are part of the Greek effort to transition away from lignite.

Earlier this month, I joined Prime Minister Mitsotakis at the inauguration of the new Mytilineos natural gas-fired power plant, which features cutting-edge GE gas turbines.  When completed, the new power station, one of the largest and most efficient in Europe, will emit less than 25% of the greenhouse gases emitted from a lignite-powered plant.

I also was very pleased by last week’s news that Minister Hatzidakis visited Sofia to sign the final agreement to implement the Gas Interconnector Greece-Bulgaria.  The IGB will link up with the TAP natural gas pipeline and eventually with the floating regassification plant in Alexandroupoli, deepening energy security and resilience for all of Southern Europe.  We look forward to more imports of U.S. LNG to Greece and via Greece to its northern neighbors.

Greece’s commitment to renewable energy mirrors that of my home state of California, and many of the reforms and technologies we’ve developed in California can help Greece to meet its renewables targets.

The U.S. is the world’s leader at combining wind, solar, and storage technology and connecting it with existing grids, so I’m delighted that GE, as well as other American companies like Tesla and Invenergy, are exploring opportunities in this sector of the Greek economy.

Throughout my travels in Greece, I’ve seen this country’s potential for the further development of renewable energy.  Even during the decade of economic crisis, Greece managed to almost triple its wind capacity with an investment of around 2 billion euros.  Today, Greece is well on its way to exceed the EU’s mandate that all member states generate 18 percent of energy from renewables by 2020.

I was also very excited to hear that the PPC Renewables board approved a contract by the American renewables company Ameresco to build a 10 megawatt wind park in Kefalonia last week.  Ameresco also built a 2 megawatt solar park for Athens Water “EYDAP,” which was connected to the grid at the beginning of this month.

And last May, I helped to inaugurate the Kato Lakomata wind energy park, the first in Greece with GE turbines.  GE is partnering with the Greek company Nostira Renewable Energy to build two more 28.8 megawatt wind farms on the Gulf of Corinth: Korobili is fully installed and awaits commissioning, while Pournari is on target for completion.  Together, these wind parks will generate 96 megawatts of electricity, placing Nostira among the top eight wind producers in Greece.

Meanwhile, in Drama, another Greek company I’ve been able to visit, called Raycap, provides essential components to the global wind power industry, including GE’s turbines.  Raycap is expanding its operations in Drama, hiring local Greek talent, but is also investing and expanding in the U.S. to take advantage of our rapidly growing renewables sector.

And over at the Patras Science Park, innovative energy technology companies like Helbio and the Greek American company Advent Technologies are revolutionizing fuel cell and energy storage technologies.

Renewable energy, energy storage, emergency preparedness and environmental protection in the upstream sector were also areas of common interest for the State Department’s Energy Envoy, Frank Fannon, and the Energy Ministers from Greece, Israel, and Cyprus when they met for the 3+1 Ministerial in August to discuss ways to turn political support into practical cooperation on energy and related issues.

Here again, the United States stands ready to share its experiences and expertise with our democratic friends.

This engagement demonstrates America’s eagerness to partner with Greece in the renewables sector.

We fully support Prime Minister Mitsotakis and his government’s efforts to preserve Greece’s unique cultural and natural heritage while protecting and harnessing the country’s unique natural resources.  Increased use of renewables further diversifies sources of supply and will promote a more comprehensive market to the advantage of consumers and the Greek economy.

As I’ve said many times, energy is a real bright spot in our bilateral relationship, and as Greece grows its role as a regional energy integrator and a guarantor of European energy security and diversity, I’m confident that renewables will become an increasingly significant part of the energy landscape.  Ευχαριστώ πολύ.