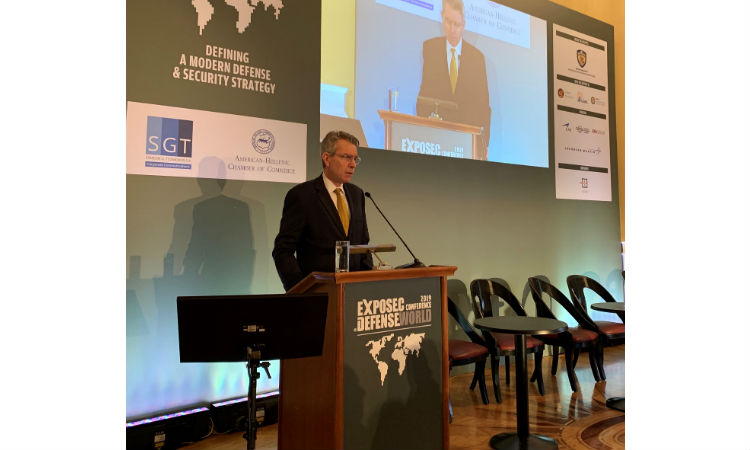 Καλημέρα σας. Minister, Admirals, Generals, Mr. Kikilias, I want to start first of all by thanking Symeon for that very generous introduction but also Simos for the invitation to speak today. Aside from being true friends, both of your organizations have been vital in our efforts to support Greece’s economic recovery and to encourage U.S. companies to explore commercial and investment opportunities here in Greece.

Given the critical importance of our defense and security cooperation, it’s extremely useful to have the AmCham so strongly engaged in this area, and I’m delighted therefore to be speaking at my third Exposec Conference, and I want to thank especially Simos, Elias, Dennis, and all of the AmCham leadership for your strong support of this strategic defense and security relationship which the United States has built with our Greek allies.

It was a special pleasure for me to hear Minister Apostolakis’s opening remarks this morning.

The Minister and his many U.S. government counterparts have worked closely together to deepen the relationship on defense, security, and counter terrorism that is stronger today than it has ever been. I want to thank you, Minister, and General Christodoulou for the Defense Ministry’s strong commitment to our bilateral relationship and for the work that we have done together to keep both of our countries secure and to ensure that our alliance remains strong.

With the arrival recently of the USS Mitscher in Piraeus and other recent visits by U.S. ships to Rhodes and Souda Bay, as well as our helicopters in Stefanivikio, our MQ-9s in Larissa, I get a lot of questions from the media especially about the increased U.S. presence in Greek seas and about U.S. military activities in Greece more broadly.

So I’d like to use my remarks today to clarify and to talk a little bit about how we are enhancing the U.S.-Greece relationship, why we are increasing our defense activity here, and how we are trying to help Greece to modernize its forces.

As NATO celebrates this year its 70th anniversary, we have frequently commended Greece for increasing its commitments to NATO and for consistently maintaining the Alliance’s 2% of GDP defense spending benchmark despite the severe economic challenge that the country has faced.

Formal security cooperation between the U.S. and Greece in fact predates NATO. Established in June of 1947, our security assistance relationship with Greece is the oldest in Europe and the second oldest in the world. But of course, this region has changed dramatically since 1947, and our security relationship and the agreements that is based upon have changed, too, to meet those new challenges.

For example, the current U.S.-Greece defense agreement was signed in 1990 and reflects a post-Cold War period when the U.S. began drawing down its 300,000 forces in Europe to a new level of about 30,000. But especially since Russia’s invasion of Crimea in 2014, the European security environment has changed significantly, along with the emergence of new threats like uncontrolled migration and foreign fighters fleeing the collapse of the ISIS “caliphate.”

Greece’s geostrategic position is critical to stability along Europe’s Southern Flank. That was true in 1947, when the U.S. committed to the Truman Doctrine and the Marshall Plan, and it remains true today, as Greece sits at the nexus of multiple strategic challenges. And in this regard – and Minister Apostolakis’s remarks described very well the regional stabilizing role that the U.S. hopes that Greece will play — I know that the Minister’s counterparts in Washington, D.C. are very much looking forward to his visit to Washington next month. Taking into account the current high point in U.S.-Greece relations and the dynamic and challenging regional security environment, we agreed at the Strategic Dialogue last December to update our defense cooperation. Doing so is intended to address not only the current security challenges, but also to develop the flexibility to quickly adapt to the rapidly changing environment, providing a view towards the challenges of tomorrow.

As part of that update, we agreed at the Strategic Dialogue to modernize our mutual defense cooperation agreement to reflect the changes in how we partner with Greece. Updating that 1990 agreement will be a sovereign decision of two democratic governments and will, we hope, facilitate enhanced interoperability, readiness, and modernization. But of course, Greece and the United States are already doing a lot more together in the defense realm.

Two years ago, for the first time in many years, U.S. forces used the ports of northern Greece to enter Europe. Components of the 10th Combat Aviation Brigade arrived at the port of Thessaloniki for a nine-month rotational deployment in support of Operation Atlantic Resolve and then departed Greece through Alexandropouli. This spring, the 4th Combat Aviation Brigade rotated out through Thessaloniki, and, next month, a Stryker Brigade will use the port of Alexandropouli to enter Europe to participate in multilateral, U.S.-led exercises. Looking at a map, you can see why the port of Alexandropouli is a focus of our activities.

Alexandropouli has tremendous potential and capacity as well as rail and road networks feeding into Eastern Europe. From a security and economic standpoint, it makes sense to further develop the port to benefit both our strategic relationship and the Greek economy. And in this regard, I remain very focused on finding an American investor as that port’s privatization moves forward.

We’ve also increased combined training that directly improves interoperability and readiness. Last month, I had the privilege of attending my third INIOHOS exercise. Each year it gets more complex and impressive, highlighting not only Greece’s competent and capable Air Force, but also its leadership and bridge-building role in the region.

It was awesome to see the F-35, the world’s most capable fighter aircraft, participate in INIOHOS this year. Exercises like this hasten Greece’s integration of a 5th generation fighter capability, and Greece’s decision to upgrade 85 F-16s to the VIPER configuration will facilitate this future transition.

But the Air Force isn’t the only benefactor of our increased exercises. With the completion of a second Alexander the Great exercise in January, the U.S. Marines have reinvigorated their relationship with the Hellenic Army’s 32nd Marine Brigade. We anticipate that this will become an annual event that will continue to advance the ability to operate together as modern amphibious forces.

We’ve also had tremendous success with regard to rotary wing aviation. In March, I had the opportunity to meet with some of our senior military leaders and local officials at the port of Thessaloniki for the departure of the 4th Combat Aviation Brigade.

This unit conducted training in Greece, and due to the exceptional environment in Stefanivikio, far exceeded its planned flying hours and departed Europe with a superior state of readiness. With the arrival of the 3rd Combat Aviation Brigade in October, we anticipate even more opportunities for combined training. These cooperative events demonstrate the strength of the U.S.-Greek relationship to all who are watching and have tremendous strategic implications and a strategic stabilizing effect on the wider region.

The U.S. has made it a priority to help keep Greece’s military modernized and capable so that it can be a stabilizing force both diplomatically and militarily.

This has been a very successful year in that regard, most notably with the agreement to upgrade the P-3B Orion aircraft, the upgrade of the Hellenic Air Force’s F-16s, the Excess Defense Article grant of 70 Kiowa helicopters, which will arrive in just a few days, and the effort to integrate Amphibious Assault Vehicles into the Greek Marine Forces.

In that regard, another bilateral success that may have flown under the radar is the U.S. and Greek defense industry participation both at the Thessaloniki International Fair, which Simos talked about, and during the Association of the U.S. Army convention in Washington, D.C. last October and coming up again this October. AUSA is the “flagship” defense industry convention in the U.S., and Greece’s official representation there along with AmCham, was an important part of our work to develop innovative, multi-purpose solutions that reduce costs while meeting requirements across the government and internationally.

The Embassy and the General Directorate of Defense Investment and Acquisition also teamed up to host a Research and Technology Symposium. Scientists from the U.S. Army, Air Force, and Navy came to Greece to hear academic research institutions present on the innovative research taking place in this country.

And, as I’ve seen in my own visits to university-based technology parks in Patras and Thessaloniki, I’m convinced there is much more happening in this space than most Greeks are aware.

All these events help to strengthen ties between Greek and U.S. defense companies while fostering research and cooperation exchanges between Greek academia, the innovative economy, and the defense industry.

These are tactical activities with strategic intents. The regeneration of the P3-B aircraft and the F-16 upgrade program require the enhancement of Greek aerospace technological capabilities. The capacity to accomplish those in-country upgrades supports Greek defense industry, while also providing expansion opportunities to customers in the wider region.

The introduction of the Kiowa helicopter, a versatile and resilient aircraft, likewise invites defense industry and even academia cooperation for the development of future upgrades. And the same is true for the U.S. Marines’ Amphibious Assault Vehicles.

Reenergizing the Greek defense sector requires investment, commitment, and cooperation from public and private industry, academia, the military, and the concerned ministries to enable foreign direct investment and workforce flexibility.

American companies like Lockheed Martin, Raytheon, and ATK have established strong Greek business partnerships. Greek defense companies such as IDE/Intracom and Hellenic Defense Systems are already working with American firms and competing globally. And there is definitely more interest from American companies, hoping to get involved in Greek ports, in the energy sector, and in other technology-driven industries as the Greek economy rebounds.

Merging innovation with defense is one formula for success. The key is to synchronize strategy, policy, and requirements to take advantage of the opportunities that arise from changes in the regional security environment.

There’s a lot of potential here, and success may very well depend on how well these opportunities are integrated. Specifically, how does the defense industry identify research and development priorities and equipment requirements to foster collaborations with academia and the Greek innovation ecosystem? Can these solutions be applied to regional and global requirements? And how can government better favor new, private investment?

In conclusion, I want to reiterate the importance that the United States places on our alliance with Greece, the capacities of our Greek allies, and the fact that the friendship between Greece and the United States continues to get stronger every day. This is a big strategic bet that serves the interests of both of our countries.

Events like today are important because they bring together senior military leadership with captains of industry to discuss the challenges we face, and more importantly, to reassess how Greece should integrate and consolidate its strengths not only to compete in the defense industry, but also to determine where Greece can take the lead. In this regard, I look forward to new momentum that 2019 will bring to our historic partnership, and I assure you of the strong support of my Embassy and the U.S. government.