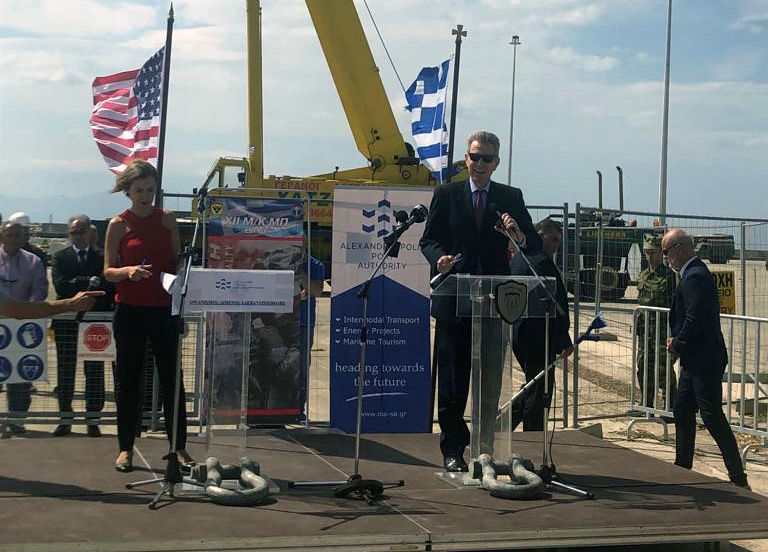 Καλημέρα! Let me start by thanking our friend Defense Minister Panagiotopoulos for going to the trouble of coming up here to Alexandroupoli to be with us here for today’s event. I also want to acknowledge all of our partners from the Hellenic Army Forces, in particular General Kambas, General Floros, as well as Deputy Regional Governor Petrovic, and Mayor Zampoukis, who I had the pleasure of meeting with earlier this morning.

I also want to say a special thank you to General Harvey and Lieutenant Commander Ferris, who is here from Navy Europe. The Embassy’s partnership with European Command, with Army Europe, with NAVEUR has been essential to our success in deepening and strengthening the alliance between the United States and Greece.

I’m very happy to be back in Alexandroupoli to highlight our work here together with our Greek allies, as well as the opportunities that we see for the future privatization of this important maritime asset. I’m pretty sure I’ve visited Alexandroupoli more than any other U.S. Ambassador to Greece, and that reflects this city’s critical geopolitical importance as a gateway to the Black Sea and Balkan regions.

Alexandroupoli is a crucial link to European energy security, regional stability, and economic growth, so it makes sense that the United States and Greece have chosen here to work together to advance our shared security and economic interests.

This project to remove the sunken dredger “Olga” is proof of our commitment to the US-Greece alliance.  The $2.3 million U.S. investment here will enhance the port’s capacity for military movements but also contribute to its commercial value.

I also want to underline something that was reinforced by my conversation here today, which is the quality of the partnership between our American and Greek representatives, whether it is our military relationship or our commercial contractors working together. We collaborate as partners and allies, and our relationship today is at an all-time high.

We look forward to the next rotation of a Combat Aviation Brigade through Stefanovikio later this year.  We also look forward to the upcoming privatization of this facility, and hope very much that there will be conditions for American investors to participate.

And finally, I would emphasize, as I have done often before, the critical importance of Alexandroupoli as an energy hub for the FSRU, the gas trade, GE power plant, and a variety of other projects.

Our work together benefits Greece, strengthens our alliance, and makes for a safer region. Ευχαριστώ πολύ.

Q&A with media after formal remarks

Thrace Newspaper: We are at a port that also faces migrant flow and crisis, with undocumented migrants from Turkey and traffickers. Is the United States interested in the undocumented migration issue in general and at the port of Alexandroupoli?

Ambassador Pyatt: Of course we are. Let me start by saying how much respect we have for the generosity that Greece and the Greek people have demonstrated throughout this humanitarian crisis that began in 2015. And of course we recognize that Greece at this point is carrying a burden for all of Europe that needs to be shared equitably. We have an excellent relationship with your migration minister, my friend George Koumoutsakos, and we have great appreciation for the efforts that he has been making both to address the logistical and operational challenges in the hot spots to ensure that Greece continues to uphold its commitments under international humanitarian law but also to work with the other members of the European Union to see that this burden is shared. We recognize that this region of Greece, Eastern Macedonia and Thrace, has seen an increase in overland crossings, and I think the important thing is we all wish to see the EU-Turkey agreement upheld and implemented in all of its dimensions, including the provisions related to relocation. Finally, I would note that this is an issue where the United States, the U.S. Embassy, the United States Department of State, tries to be helpful, including through our support to UNHCR, our programs here in Greece run through our Public Affairs offices, and recognizing that, at the end of the day, this is about a humanitarian situation which needs to be dealt with in that spirit.

Delta TV: You said you invested $2.3 million for the removal of the dredge. What’s the trade-off?

Ambassador Pyatt: There isn’t a trade-off. The nature of an alliance relationship is not built on quid pro quos. It’s built on partnerships, shared values, shared interests, and a commitment to collaboration. As I said in my remarks, I was reminded again today hearing about the excellent cooperation between the U.S. Navy officers and Army officers who are implementing this project with their Hellenic Armed Forces counterparts, the excellent relationship between Don Jon, the American civilian contractor, and Five Oceans, the Greek civilian contractor. That’s the nature of our alliance. We are making this investment, as I said in my remarks, to strengthen that alliance, as an investment in the capacity of Alexandroupoli to be a location for the transport of equipment and materiel related to both bilateral exercises as well as our NATO work together, but as a practical matter, what it also does, it raises the utility of this port, which is an underdeveloped asset, which we heard from the Ministry of Shipping and Maritime Affairs, which we hope will be able to be exploited to its full capacity as a commercial asset, as an asset for the Greek economy.

ANA: You’ve stressed the importance of Alexandroupoli port. Can it become a focal point for American interest and activities both on military level and on economic level in the future.

Ambassador Pyatt: So, I’ll say, Sofia, three things. First, Alexandroupoli has been a major focus of my efforts, as you’ve seen here with everything from the Code Girls project, which we are very glad to have brought to Alexandroupoli, to our focus on the Alexandroupoli FSRU, the GE power plant, the TAP pipeline, and of course this dredger removal project. So we’re already here. We see Alexandroupoli, as I said, as a strategically important location because of where it is at the meeting point of Greece’s borders, as a key entrepot for both the Black Sea but also the Balkans region. So we’re going to remain engaged, we’re going to continue working across all of our lines of effort. I had a good conversation today with the new Mayor talking about commercial and economic opportunities. As I said, I hope very much we will have an American bidder on the port. We will find out if that’s the case once TAIPED and the government decide on the process, the configuration that they will use. But you’re going to see more of me, more of our excellent Consul General, and more of the U.S. team generally, here in Alexandroupoli because this is a strategically important city.