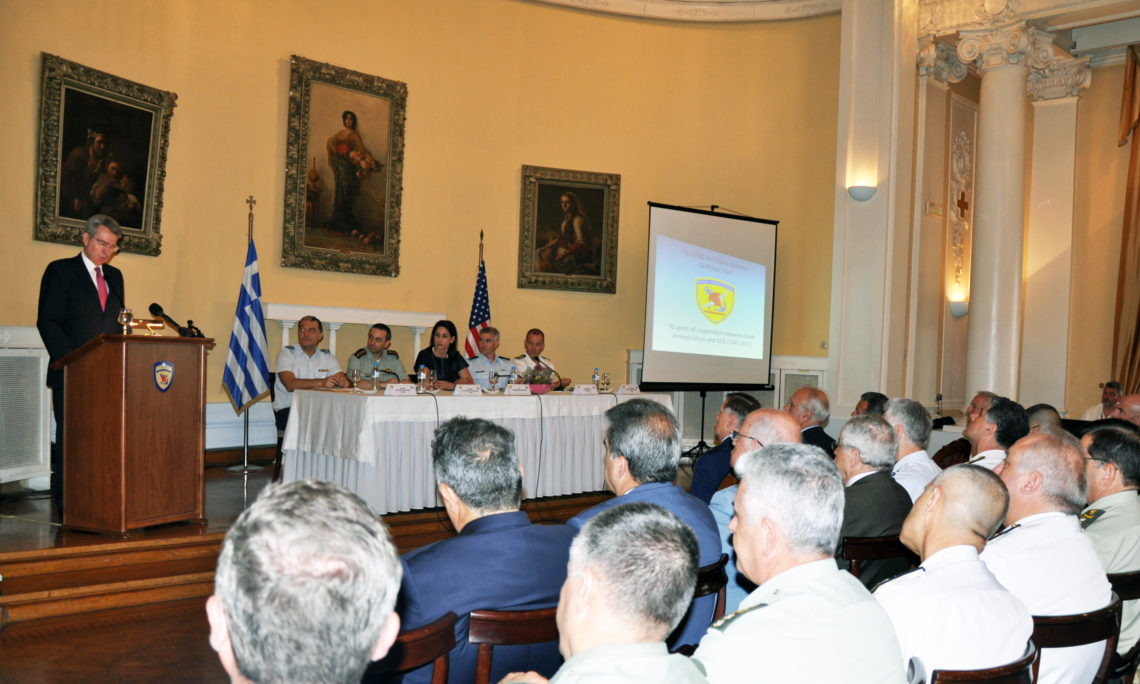 Καλημέρα!  Good morning everybody.  Thank you very much for joining us to celebrate the 70th Anniversary of our Office of Defense Cooperation and 70 years of excellent military cooperation between the United States and Greece.  I want to begin by saying special thanks to Minister Kammenos, Admiral Apostolakis, General Stefanis, General Christodopoulou, Admiral Tsounis – we are very, very grateful for your partnership and support.

I also want to acknowledge all of our other esteemed colleagues from the Hellenic Armed Forces and the Ministry of Defense and, in particular, Alternate Minister Vitsas, who I am delighted to see here with us today, in fine form.  Glad to see you, sir.  I want to say a special thank you, also, to our Office of Defense Cooperation – Colonel Gardner and the team – who put this event together today.  They have been operating at an exceptionally high tempo so, Jay, thank you for taking the special effort to acknowledge this milestone occasion.

And, finally, I want to offer a special acknowledgment of the presence here today of the EUCOM Deputy Commander, General Ray.  His attendance is emblematic of EUCOM’s and General Scaparrotti’s exceptionally strong support for our work here in Greece – this is something for which I am personally grateful.  So, thank you, General.

You know, back in 1947, we sometimes forget that Greece was on the brink of collapse.  I was reminded as we were walking through the exhibition downstairs and I was reading the memoranda of Governor Dwight Griswold who was the head of the American Mission here in Greece in 1947 – as his messages describe the chaos and devastation of World War II that had left Greece and other European countries vulnerable to hostile and antidemocratic forces.

In March of 1947, President Harry Truman delivered a speech, arguing that “the disappearance of Greece as an independent state would have a profound effect upon those countries in Europe whose peoples are struggling against great difficulties to maintain their freedoms and their independence while they repair the damages of war.”  For President Truman, it was clear that the United States and Greece needed to form a strong relationship to preserve democracy – not just in Greece, but in other European countries susceptible to malign Soviet influence.

In 1947, the U.S. Congress allocated $400 million to Greece for economic and military rebuilding – that would be worth over $5 billion today.  With this foreign assistance and millions more in Marshall Plan funds, Greece recovered from the economic devastation of war.  Gross domestic product in Greece grew for 54 of the 60 years after World War II and the Greek Civil War.  From 1950 until the 2008 economic crisis, with the exception of a period of stagnation in the 1980s, Greece consistently outperformed most European nations in terms of annual economic growth.  And, thankfully, and most importantly, democracy prevailed here in Greece – where it originally had been conceived.

The United States continued to support Greece through our Military Assistance Program – with equipment and education – as Greece rebuilt their armed forces after the war.  Dedicated Greek military personnel capitalized on that assistance from the U.S to rebuild a modern and very capable fighting force.  Today, Greece maintains the seventh largest F16 fleet in the world and has one of the largest tank formations in all of Europe.  And Greek soldiers have fought side by side with their American allies in every major conflict since World War II.

The strong relationship and defense ties forged between the United States and Greece during the post-war period firmly secured Greece’s place in the West.  Of course, in 2017, we also commemorate the 70th Anniversary of the Marshall Plan, another massive aid project that helped Greece rebuild after World War II.  We mark these anniversaries to remember the past and to consider the future of our transatlantic alliances and military partnerships.

Greece has played an essential role in maintaining the peace and stability of this complex region.  For example, Greece has played and continues to play an active peacekeeping role in Kosovo.  As a fellow NATO member, Greece answered the call when the United States invoked Article 5 after 9/11 – sending C-130s, engineers, and a Hellenic Mobile Field Hospital to Afghanistan.  President Trump just attended the NATO Summit a few weeks ago and the unveiling ceremonies for the Article 5 and Berlin Wall Memorials.  As President Trump said, the Article 5 memorial symbolizes “the courage of our people, the strength of our resolve, and the commitments that bind us together as one.”  Today, I want to thank our Greek allies for your contributions in the aftermath of 9/11.

I should add, the United States remains committed to our NATO Alliance and Article 5, as Vice President Pence reiterated at the Atlantic Council on Monday.  And Greece’s continued commitment to fulfilling its defense spending obligations under Article 3 stands out.  This shows that Greece, too, is deeply committed to our collective defense.

Within our bilateral security relationship, our Greek military partners have frequently facilitated movement of U.S. personnel and equipment through Greece – for which, we are grateful.  For example, in February, the 10th Combat Aviation Brigade deployment brought eight helicopters and dozens of containers of equipment through the Port of Thessaloniki as part of EUCOM’s Operation Atlantic Resolve in Romania.  With Greece’s help, we were able to enhance the aviation capabilities of the U.S. Army in Europe.  Now, U.S. and EUCOM Commanders are better equipped to train with our Allies and partners and respond to potential crises and contingencies.

With its unique geostrategic location and excellent military resources, Greece has provided a base for stability operations in Europe, the Middle East, Asia, and Africa.  Many of these operations, of course, were run out of Souda Bay.  We have seen how the strong cooperation between the U.S. and Greece at Souda has given our service members a strategic advantage and the ability to counter hostile regional forces with greater agility and precision.  As General Ray also noted, the U.S. military presence at Souda Bay results in tens of millions of dollars in direct economic impact for the local economy.

This kind of security and defense cooperation between allies and partners is especially important as we face increasingly complex, global challenges.  Joint exercises and training must continue so that, when our armed forces are called upon to act, they can do so decisively and quickly to eliminate any threat.  We can clearly see that spirit of cooperation within the NATO alliance, in the bilateral relationship between the U.S., Greece, and our regional partnerships.  For example, we saw Greece play a unifying role during the INIOHOS exercises this spring – bringing together partners from Israel, Italy, the UAE, and the United States.  As Greece’s economy stabilizes and grows, we hope it will play an even greater role in building bridges between partners and enhancing the security of this complex region.

And our training must evolve to match the evolving threat.  Put simply, the nature of warfare is changing.  War can now be waged surreptitiously online against a country’s critical infrastructure or banking system.  Information has been effectively weaponized in recent years to foster animosity and confusion through social media and other outlets.  We must face these challenges as a united front because threats like terrorism, cyber-attacks, and migration transcend borders and affect us all.

I’m also very encouraged to see greater cooperation on the private sector side of our security relationship.  The strong security and defense ties developed between the U.S. and Greece gave the Hellenic Military the confidence to procure over $10 billion in manufactured equipment from the U.S.  At the same time, U.S. companies spent hundreds of millions of dollars to help build Greek defense capability, which, in turn, benefitted Greek companies through coproduction and partnership agreements.

As Admiral Apostolakis described, our shared values give us a strong foundation for cooperation and partnership.  I am confident that the relationship between our militaries will remain strong and that we will continue to work together to address challenges in this region.  The challenges facing Greece and the Eastern Mediterranean region are different from the challenges of 1947.  But we must solve these problems together – to ensure lasting peace and prosperity grounded upon freedom, democracy, and the rule of law. These are the values that brought us together 70 years ago and will continue to unite us in the years to come.  I am confident that our countries’ strong military relationship will be a cornerstone for the next 70 years of peace and security.

And I was very glad, yesterday, to hear Prime Minister Tsipras at the Concordia Conference emphasize the primacy of the relationship between the United States and Greece to Greece’s own national security.  I am committed to doing all that I can to support our Greek defense partners as we advance our common security goals and capitalize on this moment of expanded possibilities in our alliance relationship.  Thank you very much.  Ευχαριστώ πολύ.