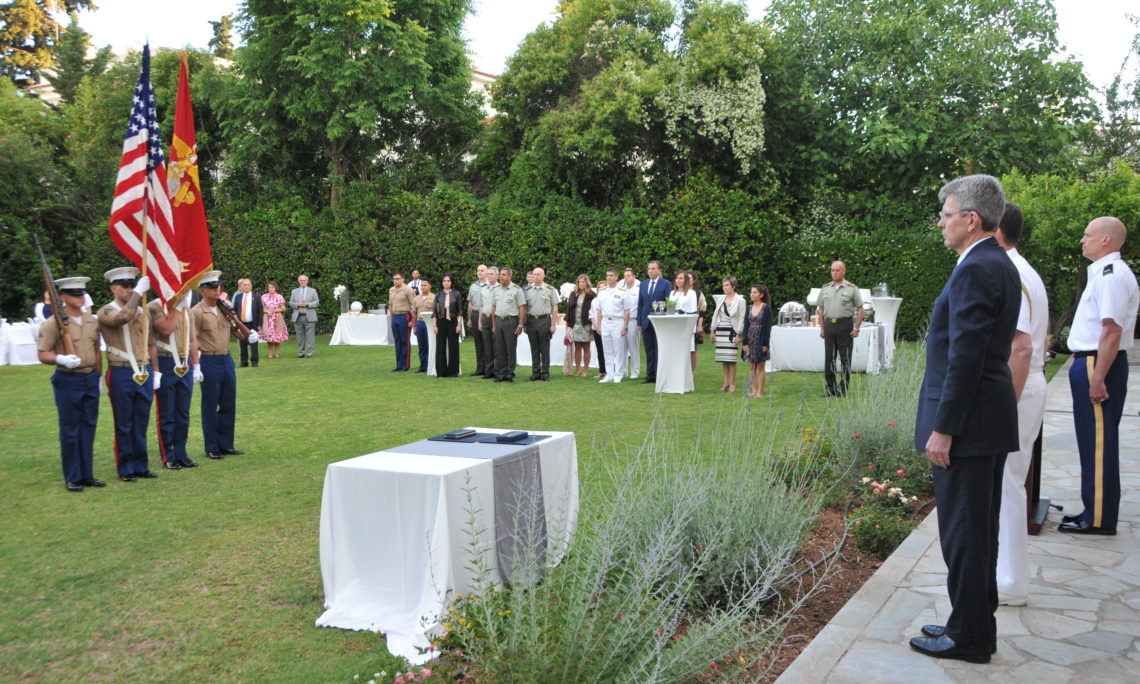 Residence of the U.S. Defense Attaché

Thank you, Rob, for the kind introduction, and thanks to both you and Paola for hosting this event this evening.

Vice Admiral Pavlopoulos, General Simeonides, men and women of the Greek and American armed forces, honored guests – it is my privilege to welcome you here to celebrate the 67th annual Armed Forces Day.

Since Armed Forces Day was first established by President Truman, each year we commemorate the unification of the U.S. Armed Forces under a single Department of Defense and honor all those who have served or are serving our country in uniform.

Today, we celebrate the bravery and sacrifice of our nation’s finest men and women, who protect and defend our core values of freedom and democracy – both at home and overseas.

We also have the opportunity to honor the men and women in military service for our Allies and partners around the world.

As a kid growing up in southern California, I was immersed in military culture – surrounded by Naval, Marine, and Coast Guard forces stationed in San Diego – including our 7th Fleet, the largest of the Navy’s numbered fleets.

As a child, the “enforcer” for my street was a Navy captain.

And my elementary school was right under the flight line of the Navy’s “Top Gun” school, so I learned the sound of an F-4 afterburner from a young age.

Every time world events would necessitate a U.S. response, San Diego would come alive and the men and women wearing the uniform of our nation would line up for duty.

I was, and remain, deeply impressed by the bravery and patriotism of these individuals who are willing to risk their lives to protect and defend our democratic way of life.

That lesson was reinforced to me in my previous post, as I saw how the U.S. Military – and the U.S. Army and National Guard in particular– were able to mobilize, as no other country could, in support of our Ukraine train and equip mission following Russia’s invasion.

I am eternally grateful for the unwavering sacrifice of our American service members, and for our enduring partnerships with Allies like Greece.

In this strategically important region, we face significant challenges to our shared democratic ideals – including human trafficking, violent extremist organizations, unregulated foreign fighter and non-state actor movements, conflict in Syria and Libya, terrorism, and the increasingly concerning influence of Russia.

I am confident that, with the cooperation and support of our friends and allies, we will overcome these challenges together.

Greece is a geostrategic stronghold, a bulwark against instability – holding and protecting the line of European freedom and democracy in the Mediterranean.

The Greek Military plays an essential role in this region –building bridges between our partners in the Eastern Mediterranean and furthering common strategic goals.

Our longstanding and well-established security partnership with Greece is all the stronger because it is grounded in our shared interests and values.

The modern chapter of our military and security alliance goes back 70 years – to the post-war period of the Truman Doctrine, Marshall Plan, and the founding of the Office of Defense Cooperation.

We look forward to commemorating these anniversaries with various events over the next few weeks.

As we have seen, time and again, our bilateral and NATO cooperation benefits Greece, the United States, our European and regional partners, and our NATO Allies.

Moving forward, we must find creative solutions to more effectively and efficiently field our combined forces to adapt to and counter evolving threats to our fundamental democratic values.

For example, we have seen how our strong military cooperation at Souda Bay has given our service members a strategic advantage and the ability to counter hostile regional forces with greater agility and precision.

NATO has an enduring mission that must be preserved to attain our goal of a Europe whole, free, and at peace.

As allies, we want to build on our existing cooperation and expand our joint capacity to meet threats and promote peace in this region.

I remain committed to maintaining and strengthening this vital military and security alliance between our two great democracies.

So, tonight, I ask you to join me in honoring all of our American and Allied service men and women – including the heroes walking among us: the Soldiers, Sailors, Marines, Airmen, and Coastguardsmen of the United States Mission to Greece.

We applaud their bravery and thank them for their sacrifice as they humbly but persistently defend and sustain freedom and democracy around the world.

Thank you all very much.