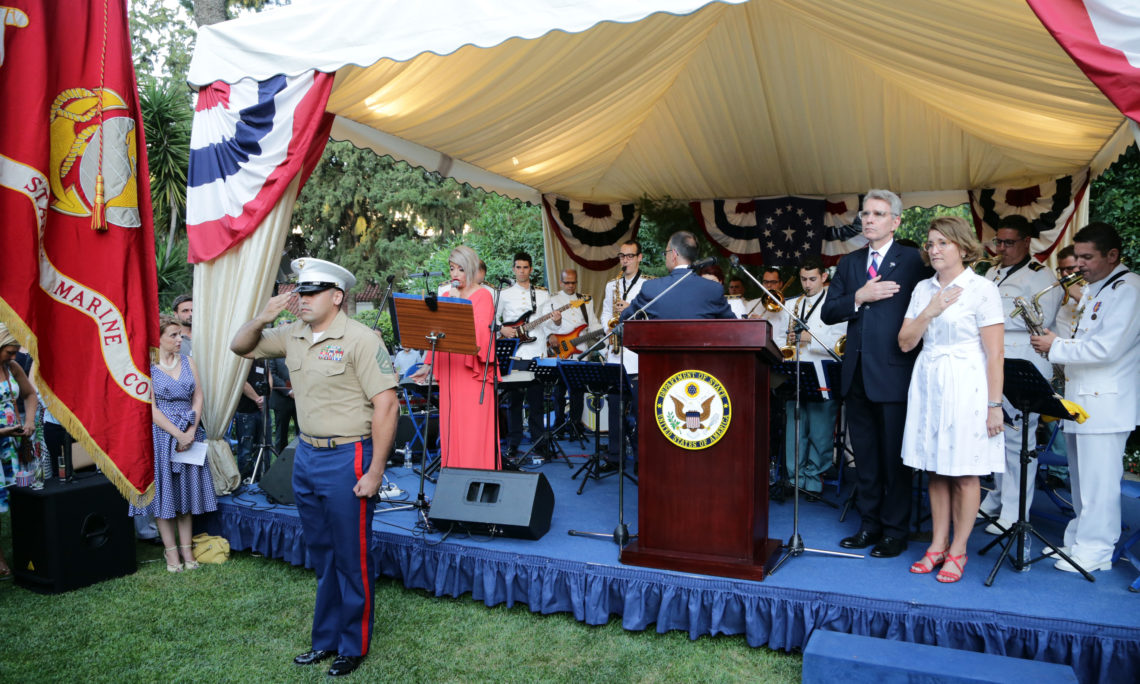 4th of July Celebration at the Residence (State Department Photo)

Hello everybody, and welcome. It’s hot up here, so I’m going to keep this short. But I want to say what an honor it is for Mary and me to welcome everybody as we celebrate the 241st anniversary of the independence of the United States.

I want to start with a special welcome this evening for Senator and Mrs. Wicker, House Foreign Affairs Committee, ranking Democrat Representative Engel and Mrs. Engel, and the other members of the large U.S. Congressional Delegation we have with us here today. Mary and I hosted Senator Wicker and his Helsinki Commission Delegation two years ago in Ukraine for a similar 4th of July Reception, so I think this is now officially a U.S. government tradition. Thank you Senator. It’s a special honor to have this large bipartisan Congressional Delegation with us to see, first hand, the strength of our bilateral relationship with Greece, a relationship based on common values and shared strategic interests. Your presence is a strong signal of the U.S. commitment to support this deeply-rooted alliance between our two countries.

I’m also grateful that we have such a large representation of the Greek government here, including Minister Skourletis, Minister Toskas, Minister Papadimitriou, Minister Pappas, Minister Kammenos, Minister Stathakis, Minister Karoblis, and anybody else who I missed in the very large receiving line. I also want to recognize the many, many other Greek political leaders we have with us here this evening, including both vice presidents of the New Democracy party. I am especially grateful to have with us here this evening the Chief of the Hellenic Armed Forces Admiral Apostolakis, who will be travelling tomorrow to see Chairman Dunford and other counterparts in Washington, D.C., as well as all of the other members of the Hellenic Military who are with us here today.

July 4 has always been my favorite holiday because it is, ultimately, a celebration of the idea of ‘America’ — the cherished democratic values that make us strong. Democratic accountability, freedom, honor — the values that inspired America’s founders originated right here in Athens, so celebrating here is especially appropriate. These democratic ideals have been the foundation of the United States’ longstanding friendship with Greece, starting from the earliest days of the American republic.

Ancient Greek ideals explicitly inspired our founding fathers, and the American Revolution, in turn, galvanized the Greek people to fight for democracy. American President James Monroe and the great American statesman Daniel Webster both supported Greece’s independence struggle, and several Americans fought in the Greek War of Independence, for which you will soon celebrate your own bicentennial. Greece has long been a bulwark of Western democratic ideals in this challenging region. And in my travels across the length and breadth of this beautiful country, one of the things that has impressed me is how Greeks, even amid a historic economic crisis, have retained their commitment to democratic values and institutions.

As Greece now begins the process of economic recovery, the United States will continue to do all that we can to see that the Greek people thrive and succeed and to further strengthen our alliance.

To conclude, I want to thank our Embassy team who put this celebration together, especially Lindsey and Sergey who were sweating bullets when it was 44 degrees out here earlier, our wonderful Master of Ceremonies Eleni, and all of our volunteers, and, of course, my wife Mary, who is responsible for most of the good things in my life. But, of course, this event would not be possible without the generous support of our many sponsors, including the Hellenic Motor Museum for lending us the iconic American racecars that are in the driveway — and if you didn’t see them on the way in, please stop by on your way out. And I particularly want to thank our allies from the Hellenic Military Band and our soloist for that outstanding rendition of the American National Anthem.

So to conclude, I would like to propose a toast to our shared democratic values and our gratitude for the gift of Athenian democracy. 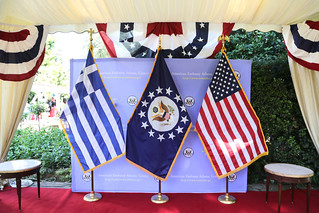