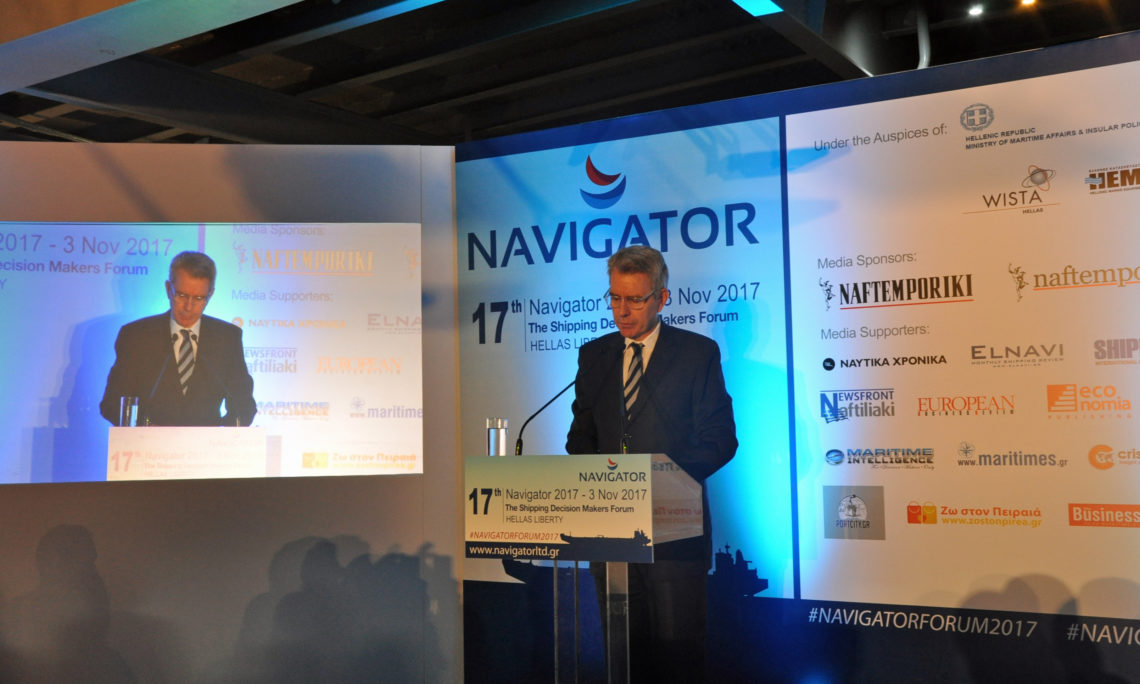 Thank you, Danae, for inviting me to speak and congratulations to everyone who made it out this morning after last night’s fantastic Amver/Propeller Club event. Congratulations George.  It’s great to see so many friends and colleagues from the Greek government and the Athens diplomatic community here today.  I also want to note how pleased I was by the selection of Lesvos as your “honored island.” As I’ve said to mayor Spyros Galinos during my visit last June, the people of Lesvos and their response to the European refugee crisis, presenting the best of philotimo.

And, it’s wonderful to be back on the Hellas Liberty.  I can think of no venue that better embodies the spirit of Greek-American cooperation. After the Second World War, these American-made ships, combined with the Greek people’s ingenuity and seafaring tradition, helped revitalize the Greek shipping industry, following the devastation brought about by the war.

We’ve also been celebrating the 70th Anniversary of the Marshall Plan this year, and along with it, symbols like this ship, which showcase the deep and historic bonds between the American and Greek people and our governments.

I know that in Greece, you have an expression: “Greek people have sea water in their blood.” And what’s great is that, in Greece, you have written testimony of this fact dating back thousands of years.  So we know when Xenophon and the 10,000 finally reached the Greek cities on the Black Sea some 2400 years ago, after the difficult march from Persia, they shouted with joy not because they saw fellow countrymen but “Thalatta! Thalatta!” because they saw their sea once again.

And I can testify honestly, throughout my trips to the islands, on Greek ships and with Greek sailors and captains, that the sea is definitely still in your blood.

So I am proud of the role the United States has played in helping the Greek shipping community re-conquer the seas over the past 70 years.  The size and scale of the Greek shipping industry today is a tremendous achievement, and provides a bellwether for the global economy.

As many of you know, I recently returned from a trip to the United States, where I accompanied Prime Minister Tsipras on his visit to Chicago and Washington.

The trip was a remarkable success and showed how much progress our two countries have made in strengthening our bilateral ties.  The U.S.-Greece relationship has never been stronger.

The message Americans heard throughout the visit, at the very highest levels, was that Greece is back, open for business and a pillar of stability in its region.

And Greek shipping symbolizes all of these messages.  It is a pillar of strength and stability in the global economy. The work you do helps to keep our economies open, dynamic, and free.  Thank you.

I look forward to seeing even stronger cooperation between Greece and the United States in the upcoming months, and predict that 2018 is set to be another groundbreaking year for our bilateral relationship.

This includes continued cooperation between our two governments, like we’ve seen during the dozens of high-level meetings we’ve held over the past year; including the visits of several U.S. congressional delegations to Greece; meetings between our Secretaries of State, Defense, and Commerce; and then culminating with the Prime Minister’s recent trip to the United States.

It also includes greater people-to-people engagement. Whether it is working with Greek and American scholars on educational exchanges through Europe’s oldest Fulbright foundation, which will be celebrating its 70th anniversary this year; or helping young leaders from Greece’s impressive entrepreneurial ecosystem grow and thrive through entrepreneurship exchange and support programs, our Embassy works hard to bring Greeks and Americans together in key sectors, to the benefit of all.

This partnership also includes enhanced bilateral investment cooperation, including an overall strategy where Greece serves as a regional hub and supplies energy from diverse sources to Europe, spurred by increased U.S. investment in this critical sector, as well as U.S. investment in Greek shipping, ports, and shipyards.  In particular, I hope we will be able to celebrate a major U.S. investment in the Syros shipyard in the very near future.

The U.S. company ONEX is eager to bring its expertise to the Syros shipyard.  I am glad to see that deal making progress and look forward to celebrating a major U.S. investment there in the coming weeks.

I would also like to reiterate a point I’ve made publicly many times before. As Greece continues along the privatization path, selling state-owned assets, including parts of its maritime infrastructure, it is essential that it does so in a manner that is open, transparent, and grounded in the principles of free and fair competition.

We saw this here already with the privatization of the 14 regional airports, where the winning bidders had a known track record of doing business in Greece and Europe.  It was clear where their financing came from and who their shareholders were.

An investment and privatization system based on transparency and the rule of law will help build confidence in Greece as an investment destination, and create momentum that can sustain the Greek economic rebound. I am confident that if Greece continues to commit itself to building such an environment, American investors will take a fresh look at Greece.

Another example is the port in Alexandroupolis.

The strategic position of this port is on full display right now: elements of the US Army’s 10th Combat Air Brigade are using it as a staging area for Blackhawk helicopters and cargo moving back to the U.S. from Romania — demonstrating, as I discussed with the Mayor of Alexandroupolis this summer, the potential of that port to play a much bigger role in regional infrastructure and connectivity.

In conclusion, I want to underline how proud I am to say that the friendship between Greece and United States has never been stronger. We have reached a special moment in our bilateral relationship, and we must continue to build on this momentum.

You are all aware that the U.S. will be next year’s honored country at the premier trade fair in the region, the Thessaloniki International Fair.  President Trump called it an opportunity for us to highlight, on the world stage, American entrepreneurship, innovation and enterprise, and he promised to send a high-level delegation to represent the U.S. at the fair.  But the fair will also give us the opportunity to highlight our strong bilateral relationship in all the areas I mentioned earlier, whether economic, defense and security, or people to people.

My Embassy team, in cooperation with the American-Hellenic Chamber of Commerce, is already working on a series of events around the TIF, to demonstrate – as Governor Tzitzikostas put it to me – that America is back in Northern Greece.  I encourage you all to attend these events and, of course, the fair itself.

Greece and the United States will continue to profit from strengthening the ties between our people, businesses, and governments. A strong Greece, in the American view, also benefits Europe and the wider Mediterranean and Balkans regions.

As President Trump told Prime Minister Tsipras in the White House Rose Garden: “America’s friendship with the Greek people has been long and enduring.”  And Thomas Jefferson wrote at the dawn of the modern Greek state that “no people sympathize more” with Greek patriots and “none offer more sincere and ardent prayers to heaven for their success” than the American people.”
I am extremely proud of the US Embassy’s role in building this partnership, and want to underline today my respect and appreciation for the vital role that the Greek shipping industry has played in building this relationship that is so important to both our countries.